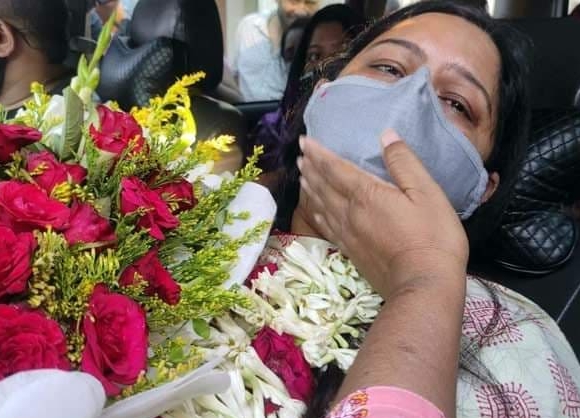 Prothom Alo Senior Reporter Rozina Islam has been released from prison after a Dhaka court granted her bail in a case filed under the colonial-era Official Secrets Act by the Health Ministry.

She was released from the Kashimpur Women’s Central Jail around 4:15pm on Sunday, Jailer Hosne Ara Bithi told media.

“She was freed soon after we received the court order,” said the prison official.

Earlier in the day, Dhaka Chief Metropolitan Magistrate Baki Billah granted the bail upon a bond of Tk5,000.
Subject to the submission of the journalist’s passport, the bail was granted till July 15.

Earlier on Thursday, the court fixed Sunday for passing an order after hearing the bail petition virtually.
On May 17, she was allegedly confined by some Health Ministry officials for five long hours inside an official’s room at the Bangladesh Secretariat.

Later, charges of “stealing” official documents and “taking photographs” of confidential documents were brought against Rozina Islam, an award-winning investigative journalist.
An FIR was filed against Islam under the Official Secrets Act and Sections 379 and 411 of The Penal Code on a complaint filed by the Health Services Division with Shahbagh police.

Later, on May 18, a Dhaka court sent Islam to jail after rejecting the police’s demand for her five-day remand. Islam was taken to Kashimpur Central Women’s Jail on that day.

The Ministry of Health and Family Welfare has formed a three-member probe committee to look into the allegations of the journalist’s detention at the Secretariat and also her subsequent handover to the police. The committee was supposed to submit its report in three working days but are yet to do so.

Meanwhile, the case filed against Islam was transferred to the Detective Branch of police on Wednesday.