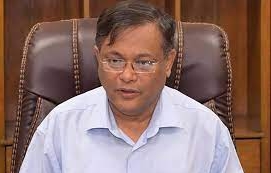 Travel in Israel for Bangladeshi nationals is banned whether it is written or not in a passport. Similarly, no one can enter Bangladesh with an Israeli passport, says Minister Hasan

Expressing Bangladesh’s firm stance on the Israeli issue, Information and Broadcasting Minister Dr Hasan Mahmud has said that the country [Bangladesh] will not budge an inch from Bangabandhu’s policy on this issue.

“The change in the passport has been made due to international norms. There is no reason for Israel to be happy. We have no diplomatic relation with Israel.

“Travel in Israel for Bangladeshi nationals is banned whether it is written or not in the passport. Similarly, no one can enter Bangladesh with Israeli passport,” he said.
The minister stated this while replying to a query of reporters at the meeting room of his ministry at the secretariat in Dhaka on Monday.

He said many Islamic countries in the world have no relations with Israel. “But it was mentioned in Bangladeshi passport while it was not mentioned in their [Islamic countries] passports. They [People of Islamic countries] don’t travel to Israel with their passports,” he added.
About the diplomatic relation, Hasan said the position of Bangladesh in favour of establishing a Palestinian state and the crimes against humanity committed by Israeli remains at the same place. The way in which Israel has launched attacks recently on Palestine has further consolidated that position of Bangladesh and the country has protested the attacks, he added.

Replying to another query over a comment of BNP Secretary General Mirza Fakhrul Islam Alamgir, the minister said journalist Rozina Islam got bail on Sunday. “For this, I, myself, expressed satisfaction with the journalists’ community. But, as per the statement of the BNP leader, it seems that they [BNP] are not happy with the bail of Rozina Islam. They wanted Rozina to stay at prison for more days so that, they (BNP) can do politics on this issue,” he added.
In the function, Hasan said one ambulance from NNK Foundation and one from the government were given for the dwellers of Ranguniya. They are getting services through the two ambulances, he added.

The minister hoped that the new freezer van can help the people of the area.