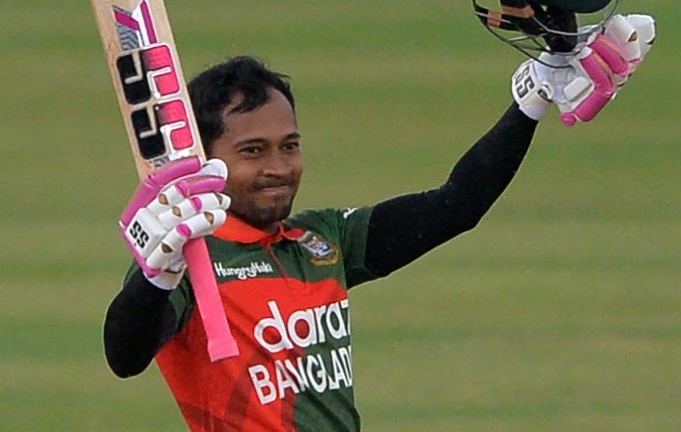 A scintillating century from Mushfiqur Rahim propelled Bangladesh to a first ever series victory against Sri Lanka with an easy 103-run win in Mirpur
The crushing victory under the Duckworth-Lewis method in the rain-hit second ODI also took the Tigers to the top of ICC’s ODI Super League table with 50 points in eight matches, above Pakistan (40) and Australia (40).

The hosts were in danger of capitulation before Mushfiqur came to their rescue with his eighth ODI century. He hauled his team to 246 before falling as the last wicket at the Sher-e-Bangla National Cricket Stadium on Tuesday.

Following two pauses for heavy downpours during the Bangladesh innings, the Islanders were shaky all through the chase.

Offspinner Mehidy Hasan Miraz (3-28) and seamer Mustafizur Rahman (3-16) tightened the screws to restrict Sri Lanka to a meagre 141 for nine in 40 overs after the visitor’s chase was curtailed to 40 overs for a late shower.

Bangladesh, who opted to bat first with rain on the cards, had a poor start as Tamim Iqbal (13) and Shakib Al Hasan (0) fell early. They were both trapped in front by Dushmantha Chameera (3-44), and in came Mushfiqur.

When Liton Das (25) and Mosaddek Hossain (10) departed, the hosts were stuttering on 4-74
Mushfiqur then rebuilt the innings with Mahmudullah (41) and added 87 for the fifth wicket. The duo were prolific in the stand, scoring on either side of the wicket with ease and rotating the strikes regularly.

Sri Lankan left-arm wrist spinner Lakhsan Sandakan broke the partnership when Mahmudullah paddled fine to the wicketkeeper in a premeditated shot and triggered a brief collapse which reduced Bangladesh to 184 for seven.

run resistance with Saifuddin, who was run out for 11 after taking a nasty Chameera bouncer to the helmet requiring medical attention. Taskin Ahmed later replaced him as a substitute during the Sri Lankan innings.

Mushfiqur waged a lone battle and cracked a boundary to reach his century off 114 deliveries, lacing his innings with 10 fours.

Miraz and Shakib Al Hasan (2-38) then took advantage of the tricky surface to regularly chip in with wickets as no Sri Lankan batsmen were able to anchor the chase.
Still 121 runs away from the shore, Sri Lanka found themselves reeling at 126-9 when rain swept in and curtailed the game to 40 overs and the target reduced by one run to 245 with the application of the D/L method.

Adjudged Man of the Man for the second time on the trot after scoring 84 in his previous game, Mushfiqur said, “A win is always special and when you contribute it feels great. I was very disappointed that I couldn’t finish the game because 11 balls were left. We lost a couple of early wickets but it happens against the new ball.

“Riyad (Mahmudullah) batted really well with them and a couple of other guys chipped in. Our bowling was special tonight. There’s always area to improve and you have to be selective with shots on these tracks, it’s not easy to play here. Our batsmen will take a few notes from this innings and come better in the next match.”

During the post-match presentation ceremony skipper Tamim said: “Luckily we won two games and we’re happy we won the series. We haven’t played the perfect game yet, hoping we can in the third game.

“We lost a lot of wickets and 200 was looking difficult at one point, Mushy’s innings was really good, Riyad chipped in as well. It was an okay total we posted, the wicket played well.

“The way Shoriful bowled and Taskin came in as a concussion sub, it’s not easy to bowl suddenly, he showed character. Spinners Miraz and Shakib were brilliant, our fielding is getting better now. We still haven’t nailed it yet.

“Before the series I told the team we have to step up our fielding. You take some catches and drop some, but it’s the ones you drop that can turn and win matches. It was required today but it’s crucial to take such catches.”