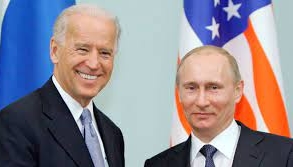 US President Joe Biden and Russian President Vladimir Putin are planning to meet next month in Geneva, the first face-to-face meeting between the two adversaries and one that comes at a time of deteriorating relations.

The day-long summit is scheduled for June 16, according to an official familiar with the meeting, and will cover a wide range of topics including nuclear proliferation, Russian interference in US elections, climate change and covid-19.

Biden is also expected to raise concerns over Russian troops amassing at the Ukrainian border, as well as Russian ally Belarus forcing down a civilian jetliner flying over the country and arresting an opposition journalist on board.

US officials are not expecting the meeting to produce major breakthroughs, nor do they view it as a reset in relations between the two countries in the same way that former president Barack Obama had hoped early in his administration to usher in a new era of cooperation between the two longtime adversaries.

Instead, it is seen as a venue for Biden and Putin to improve their relationship and gain a better understanding of each country’s interests and potential problem areas.

US officials approach the relationship as one that will be a complicated and difficult one, but they also see Putin as a highly personalized decision-maker and one whom Biden needs to cultivate.

It will be perhaps the most important meeting of Biden’s early presidency. He built much of his Senate career on foreign policy expertise, and has long prized the personal connections he has formed with foreign leaders.

During the Obama administration, he was often dispatched to deepen relationships with high-level officials in Afghanistan and China.

When Biden met with Putin during a 2011 meeting, he said that he looked into the Russian leader’s eyes and said, “I don’t think you have a soul.”

Putin, in Biden’s account, looked back at him, smiled, and said, “We understand one another.”

Since taking office, Biden has had two phone calls with Putin. During a call in April, Biden proposed a summit.

One of the top areas they plan to work on is a long-lasting agreement on controlling each country’s nuclear arsenal.

Biden and Putin have agreed to extend the New START nuclear non-proliferation treaty for five years, but are also looking for a longer-term agreement to prevent an arms race.

The meeting in Geneva will come at the end of Biden’s first international trip as president. Biden is first scheduled to meet with a Group of 7 summit in England, and then attend meetings in Brussels with Nato and the European Union.