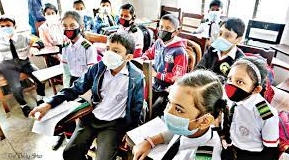 The government wants to reopen all educational institutions except universities on Jun 13 if the coronavirus situation remains favourable.
Announcing an extension of the shutdown of schools and colleges to Jun 12, the education minister on Wednesday said stretching the closure is not what the government wants.

“Our plan is to reopen the educational institutions on Jun 13. We want to do that if the situation does not get worse,” Dipu Moni said.

The authorities will be watching the situation before taking the final decision
She ruled out the reopening of schools only in places where the coronavirus outbreak has been under control. “Opening the institutions at some places will create inequality,” she remarked.

Students and parents are concerned about the possible effects the delay will have on education.

The minister said a spike in the number of coronavirus cases forced the government into extending the shutdown.

“We hope the situation will improve soon and educational institutions will be able to reopen.
“We are taking preparations for the reopening of all secondary and higher secondary schools and have sent instructions on how to do so while following health protocols,” the minister added.

Students at several educational institutions across the country have demonstrated for the reopening of schools.

The government had previously announced plans to reopen schools, but the shutdown has instead been extended several times because of the pandemic.

On Feb 27, the education minister announced plans to reopen schools and colleges on Mar 30, while universities were to reopen on May 24. But the second wave of coronavirus scuttled the government’s plans, forcing the authorities to extend the shutdown.

As in-person teaching has been on hold, the education ministry has also had trouble coming to a decision on how to run the SSC and HSC exams.