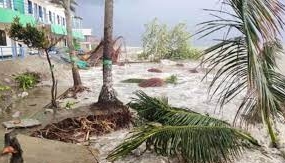 The coastal areas of Cox’s Bazar have suffered severe damage due to Cyclone Yaas and tidal surges.

The cyclonic storm, which has already made landfall in India’s Odisha, has inundated at least 45 villages in the district.

The wrath of the storm has been felt most by St Martin’s Island in Kutubdia.

“As many as 50 houses on the island have been destroyed. In addition to the massive erosion around the island, 15 tourist resorts have also been damaged.

“This happened due to the cyclone and tidal surge. Houses here have been extensively damaged. Strong tides have broken through the island’s embankment. The houses near it have been destroyed by strong tidal waves.

“Besides, the people of the island, all 8,000 of them, have been evacuated to the designated cyclone shelters.”

Meanwhile, 10 more villages located in the suburbs of Cox’s Bazar have been flooded. Several villages of Gomatali Islampur union of Sadar upazila are now submerged.

Abdur Rahman, assistant meteorologist at Cox’s Bazar Met Office, said: “The water level in the coastal areas of Cox’s Bazar has risen drastically. It is flowing four to five feet above danger level. All of this is happening due to Cyclone Yaas and the full moon.

“However, the effects of the cyclone will start to wear down from Wednesday afternoon,” he added.

Cox’s Bazar district Additional Deputy Commissioner Amin Al Parvez said: “We are yet to measure the damage caused by Cyclone Yaas. Due to the full moon, tidal water has risen dramatically, causing inundation in the coastal areas of Cox’s Bazar.”