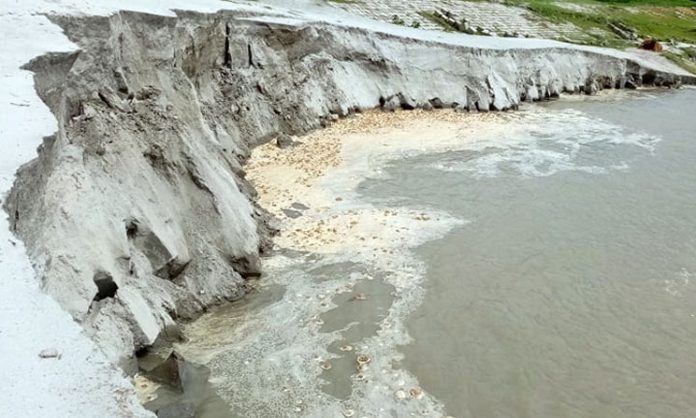 The Jamuna has turned fierce as its strong currents and whirlpool vortices aggressively crash into the riverbanks situated in Dhunot upazila of Bogra.

On Tuesday, a 100-meter portion of the riverbank on the south side of the Bhandarbari High School in the upazila collapsed into the riverbed in a matter of hours.

Now, people living along the riverbank say crores worth of public and private properties along the flood control embankment are at potential risk of being devoured by the river.

Bhandarbari Union Chairman Atiqul Karim Apel said the water level of the Jamuna River had been on a constant rise for the past several days.

“Indications of erosion were first spotted at the riverbank on the south side of the Bhandarbari School on Tuesday morning. And within hours, by the afternoon around 100 meters of the bank were lost in the river,” he added.

The sudden and rapid erosion at the Jamuna riverbank in the upazila has become a matter of extreme panic among its people.

Residents of Bhandarbari, Pukuria, Janglabad, Madhabdanga and other nearby villages say they are worried about the safety of their lives and property.

Abdur Rahman of Bhandarbari village said that if the rapid rate of erosion was not brought under control immediately, it would start threatening the flood control embankment within 4-5 days.

Munju Miya, also from the village, said if there was an embankment breach during the monsoon season, hundreds of families from 8-10 villages, including Baraitali, Baniajan and Kaiyagari under Bhandarbari union would suffer from waterlogging.

Another local, Rashid Sheikh, said a large number of establishments. including Bhandarbari High School, a government primary school, and the Upazila Health Centre would also be affected.

The matter was brought to the notice of officials of Bogra Water Development Board (WDB), said Bhandarbari Union Chairman Atiqul Karim Apel.

Nibaran Chandra, deputy assistant engineer of the Water Development Board, Bogra, said he had already inspected the eroded site after receiving the news.

“The 100 metres that had been washed away were mostly composed of sediments that had formed on top of the riverbank protection made up of concrete blocks to prevent erosion.

“Now, the situation will further deteriorate if the rapid rate of erosion turns severe and the concrete blocks protecting the riverbank collapse into the riverbed,” he said.

The higher authorities have been urged to take immediate action in this regard, he added.