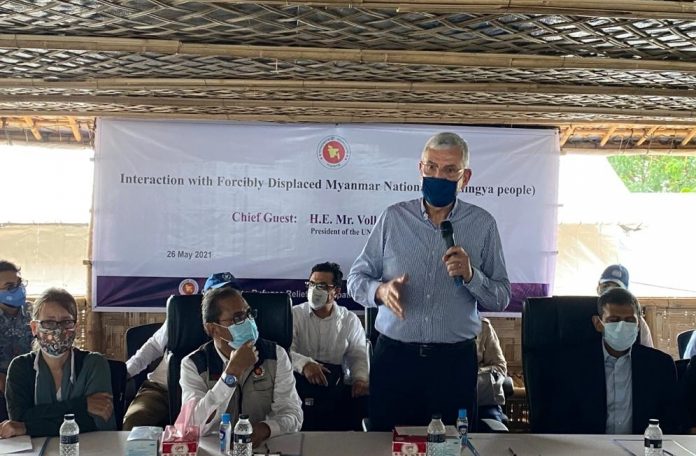 Rohingyas’ rights to return and citizenship must be respected, he says while visiting refugee camps

Rohingya refugees on Wednesday urged the United Nations to put pressure on Myanmar for citizenship and safe return to their homeland a day after United Nations General Assembly (UNGA) President Volkan Bozkir arrived in Bangladesh on a two-day trip.

An aircraft carrying the UNGA president landed in Cox’s Bazar at around 9am.

Shamsuddoha said Bozkir spent half an hour at the camp and met with some 30 refugees.

“Rohingyas requested the UNGA to put pressure [on Myanmar] about their citizenship and take steps to ensure their safe, dignified and voluntary repatriation to Myanmar,” added the official.

Shamsuddoha was among senior Bangladeshi and UN officials who accompanied Bozkir during the visit to the camp, defying adverse weather.

Later in the day, Bozkir took to Twitter to say that the UN General Assembly had not forgotten the Rohingya people.

“To the people I met, I will uphold my promise to share your stories back in New York,” he tweeted after visiting Rohingya camps in Cox’s Bazar district.

The UNGA president said: “I came face to face with resilience today in Cox’s Bazar. We often speak about the Rohingya in UNGA, but today I spoke with them.”
Earlier on Tuesday, he said basic rights, including citizenship, and the creation of conditions conducive to the voluntary, safe, dignified and sustainable return of all Rohingyas must be respected.

“The safety and security of the Rohingya and other minorities must be secured,” he said while delivering his keynote speech at the Sixth Lecture of the Bangabandhu Lecture Series at the Foreign Service Academy.
Foreign Minister Dr AK Abdul Momen also spoke at the program, entitled “Bangabandhu, Bangladesh and the UN.”

Bozkir said he firmly believed they cannot speak on these issues from afar. “The United Nations must continue to reach out to the people we serve.”

Turning to the issue of human rights and humanitarian action, he commended Bangladesh for offering shelter and protection to the Rohingya fleeing persecution and unspeakable crimes in the Rakhine state.

Bozkir mentioned that Bangladesh had stepped up at a moment of crisis to uphold the principles of the United Nations.

“Please allow me, on behalf of the United Nations General Assembly, to thank you. History will define your actions as heroic,” he said.

Bozkir said he remained “deeply concerned” about the humanitarian implications of the military’s recent actions in Myanmar. “I join calls for an immediate end to the violence.”

A year ago, he said, the International Court of Justice ordered Myanmar to do everything possible to prevent a genocide against the Rohingya.

“This order retains its urgency and should not be forgotten as we face new challenges relating to the coup and its violent aftermath,” Bozkir said.

Earlier at the joint media briefing, the UNGA President said most probably the UN would have a meeting on Myanmar where the organisation would try to reach a consensus.

Personally, he said, he was completely against any military coup anywhere in the world.