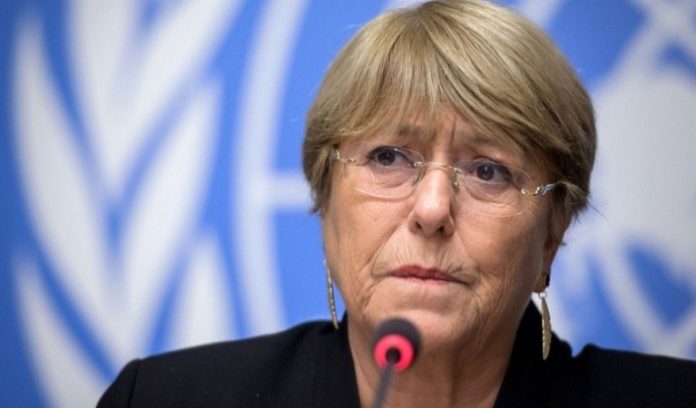 The United Nations human rights chief has expressed concerns over the high number of civilians martyred in the latest Israeli aggression against the besieged Gaza Strip, saying the regime’s deadly airstrikes on the coastal enclave may constitute war crimes.

Addressing the 30th special session of the Human Rights Council on Thursday, Michelle Bachelet voiced deep concern about the “high level of civilian fatalities and injuries” from the Israeli attacks on Gaza.

Bachelet censured the “indiscriminate and disproportionate” airstrikes by the occupying regime that caused widespread destruction of civilian infrastructure and deaths in Gaza, saying, “such attacks may constitute war crimes.”

The UN rights chief also said her office had “not seen evidence” that the buildings targeted in the coastal enclave, including residential homes, medical facilities and media offices, were “hosting armed groups or being used for military purposes,” as claimed by Zionist regime authorities.

“While the shocking loss of life and destruction in Gaza has justifiably made headlines around the world, the alarming situation in the West Bank has gone unnoticed by many,” Bachelet said, adding that tension, protests and violence, including the heavy use of force by the Israeli regime forces “has reached levels not seen in years.”

She added that on May 14 alone, the Israeli forces “killed 10 Palestinians in the context of demonstrations and clashes, the highest number in one day in the West Bank since the United Nations started systematically collecting these figures in 2008.”

“In Sheikh Jarrah and other neighborhoods of East Jerusalem, the risk of evictions remains and continues to fuel tensions. Such evictions should cease, in line with Israel’s obligations under international law. I urge the Israeli authorities to immediately halt the process of evictions,” the UN rights chief noted.

Bachelet noted that unlike Israelis, “who have the benefit of the ‘Iron Dome’ and professional military forces to assist in their protection,” Palestinian civilians have virtually no protection against airstrikes and military operations carried out in one of the most densely populated areas of the world.

“They have no place to escape to, due to the Israeli land, air and sea blockade that has been in place for the last 14 years. As a result of this blockade, Palestinians in Gaza have suffered from a crumbling infrastructure and diminished access to basic services, including inadequate health services and a decaying sewage system that poses a direct threat to the health and well-being of all civilians resident there. The incapacity of the health system to comprehensively respond to COVID-19 in the recent surge in cases made this deterioration particularly evident. To obtain appropriate health care, many Palestinians are forced to travel abroad subject to permission by Israel, which is frequently denied,” Bachelet added.

During the rights council session, member states debated a proposal to launch an international investigation into violations surrounding Zionist entity’s latest deadly onslaught on Gaza and “systematic” abuses of the regime in the occupied Palestinian territories.

The proposal, presented by the Organization of Islamic Cooperation (OIC), called on the council to “urgently establish an ongoing independent, international commission of inquiry… in the Occupied Palestinian Territory, including al-Quds.”

In support of the OIC’s proposal, a total of 163 Iranian universities and academic figures called on Secretary General of the United Nations Antonio Guterres on Monday to take action against Israel’s crimes during the recent war on the besieged Gaza Strip through the UN Security Council and the International Criminal Court (ICC).