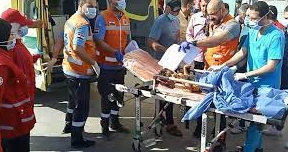 The World Health Organisation called on Friday for access to patients in the Gaza strip and free passage to evacuate them for medical treatment as health workers struggle to care for the sick and wounded after 11 days of violence.
WHO spokeswoman Fadela Chaib told a Geneva briefing that around 600 patients, including some with chronic conditions, needed to be referred outside of the Palestinian enclave since the start of the hostilities, but had been unable to due to crossing closures.

“It’s very important that we help Palestinians get the care they need, especially helping them get treatment outside the Gaza strip,” she said.

WHO has a presence on the ground, Chaib said, but was unable to confirm whether it currently had any access from the outside. Other aid agencies have complained about limited humanitarian access and drug supplies.
Dozens of health centres were damaged during Israeli bombings earlier this month, prompting the WHO to warn that facilities risked being overwhelmed.

“The capacity of the health system to respond is completely crushed,” Helen Ottens-Patterson, MSF head of mission in Gaza, told journalists earlier this week.

In an indication of the challenges ahead, she said that an MSF team had to “wade through rubble and glass” to access a ministry of health compound earlier this week.

Aid workers have also raised concerns about a possible surge in COVID-19 infections after the latest violence, since many people displaced by bombings were crowded together for shelter.
>>Reuters