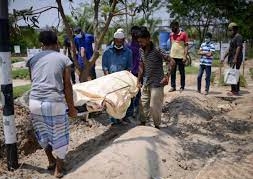 Bangladesh records another 38 deaths and 1,043 infections over the last 24 hours till Saturday morning.

The latest figures were published by the Directorate General of Health Services, via press release, on Saturday.

Of the 38 deceased, 28 were male and 10 female. Nineteen were aged above 60 years, six were aged between 51-60, nine were between 41-50, and four were between the ages of 31-40.
Eight of the deceased were from Dhaka division, seven from Rajshahi and Khulna, five from Sylhet, four from Chittagong and Rangpur, two from Mymensingh, and one from Barisal divisions.

Thirty-seven of them died in hospitals while one Covid-19 patient died at home.