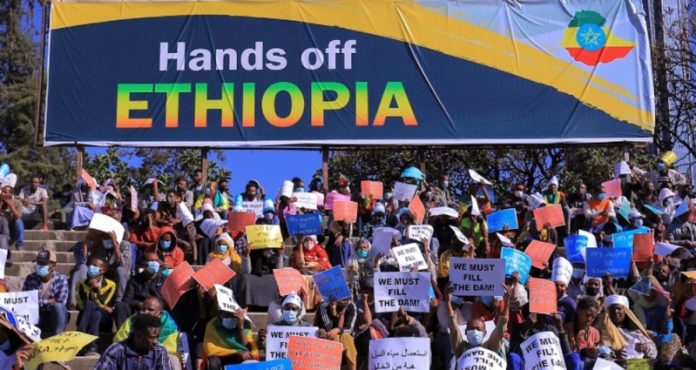 Ethiopians have staged a huge rally to protest Washington’s imposed restrictions on aid to the country over the Tigray conflict.

The United States has imposed restrictions on economic and security assistance to Ethiopia over the ongoing atrocities in the northern region, including a ban on travel visas to current or former Ethiopian or Eritrean government officials.

The pro-government demonstrators carried placards written in English, Arabic and Amharic, calling on Washington not to meddle in the country’s affairs.

“Hands off Ethiopia”, “USA show us your neutrality”, and “Ethiopia doesn’t need a caretaker,” were among the protesters’ demands as reflected in some of the banners.

Addis Ababa Mayor Adanech Abebe told demonstrators present at the Sunday rally that the nation will never give in to Washington’s illegitimate demands.

“We will never kneel down. The preconditions and travel restrictions by the US and its allies are completely unacceptable. It needs to be corrected,” he said in an address to the rally organized by the Ministry of Youth.

Ethiopia and neighboring Eritrea sent troops into Tigray in November after accusing the once-dominant regional ruling party, TPLF, of launching attacks on Ethiopian federal army troops based in the region.

Rights groups and aid organizations who made their way into Tigray reported that the troops had committed violations and massacres in the region.