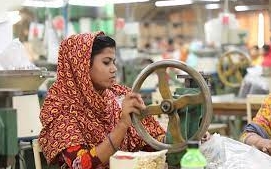 Readymade garment (RMG) manufacturers are hopeful that exports might make a full recovery by October this year thanks to the rebounding of shipments.

The reopening of Western retail stores is raising hopes as manufacturers expect exports to return to pre-pandemic levels within a few months.

According to the Export Promotion Bureau (EPB) data, export earnings from the sector soared by 6.24% year-on-year to $26 billion in July–April of the current fiscal year following a rebound of apparel shipments.

Knitwear had earned $13.99 billion, registering a 15.34% year-on-year growth, but earnings from the woven sector dipped 2.71% to $12 billion, EPB data shows.
Industry insiders said that most of the people in buyer countries are spending more time indoors because of the pandemic, which has lifted knitwear exports. The same reason played a role in the export plunge of woven apparel, such as formal attire, during the pandemic.

April saw the lowest decline, meaning now the segment is rebounding thanks to the gradual reopening of stores and offices.

Faruque Hassan, president of the Bangladesh Garment Manufacturers and Exporters Association (BGMEA), said at a briefing recently that the trend of RMG exports is satisfactory as the demand has risen in the buyer countries.

“I hope the exports from the RMG sector will gain a full recovery by October of this year,” he also said.

He also said that the majority of the people in the US have already been vaccinated and they have started going outside to markets and retail outlets.

SM Mannan Kochi, senior vice-president of the BGMEA, said that European retailers and brands have started reopening their stores in various cities and consumers are going to retail shops because of which the demand for Bangladeshi RMG items is growing.

According to EPB data, Bangladesh currently supplies RMG items worth $6.5 billion yearly to the US — the largest single destination for apparel exports.

Moreover, EU countries receive RMG items worth $21 billion annually from Bangladesh, which is 63% of their total apparel exports.

Work orders are being shifted to Bangladesh from other countries like China, thanks to competitive prices and the Covid-19 setbacks.

Kochi said that they have already urged the government to provide vaccines for RMG workers on a priority basis. If the workers are vaccinated, the scope of work and production will also increase.

“Exports have increased but this does not mean that they have returned to normal. The export rate has not yet reached the pre-pandemic level. But we are hopeful that we will be able to recover from this mess,” he added.

He said that government cooperation is required in this situation, adding that RMG manufacturers hope the government will consider the incentive they have demanded and consider their budget proposals.
“As the lifeline of Bangladesh’s economy, we want to work to keep the wheel of the economy of the country moving,” he added.

Regarding the budget of FY22, both president and vice-president said that they have already sent budget proposals to the government.

Faruque Hassan also demanded a 10% incentive on export receipts from garment items made from manmade fibre.

“The demand for RMG items produced from the manmade fibre is very high in the international market — it is more than 80% — whereas 80% of Bangladesh’s total garment export is made from cotton fibres,” he added.

He said that for this reason, Bangladesh is lagging in the trade of RMG products made from such specialized fabric.