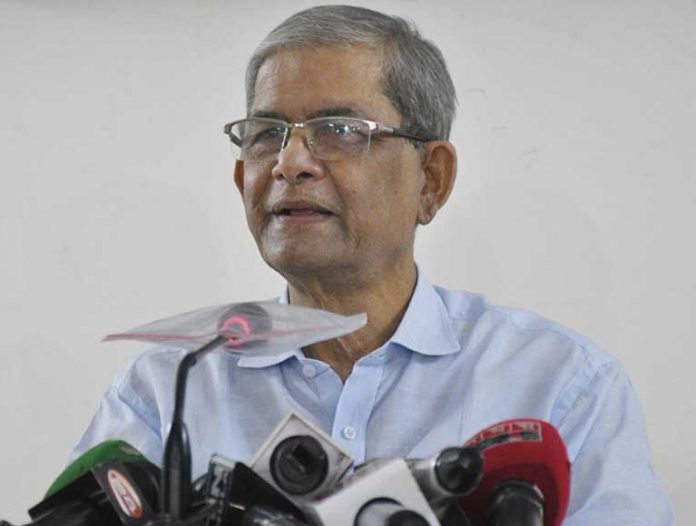 The finance minister has given the businessmen with both hands, but the common people have got nothing, says Fakhrul

The BNP has said that people’s hopes and aspirations have not been reflected in the proposed national budget for fiscal year 2021-22 as the finance minister failed to adopt necessary plans and measures to protect their lives and livelihoods.

“We can simply say this budget could not reflect the hopes and aspirations of the people of Bangladesh, rather they have been deceived. The finance minister has given the businessmen with both hands, but the common people have got nothing,” said party’s Secretary General Mirza Fakhrul Islam Alamgir on Friday.

Speaking at a press conference on the proposed budget at the BNP chairperson’s Gulshan office, he also said no step has been taken in the budget for easing the sufferings of the poor and lower-income people.

“BNP thinks that the proposed budget for the fiscal year 2021-22 has completely failed to adopt the plans to ensure people’s lives and livelihoods during the pandemic.”

Stating that corporate tax rates have been reduced, he said that the finance minister has appeased the business community, but the middle-class people have got frustrated.

“Businessmen have benefited in many ways in the budget. But the budget did not give any concessions to the common people. Even, the 2.45 crore new poor and the middle-class people have been ignored in the budget,” said Fakhrul, a former state minister for agriculture during 2001-05 tenure.

The BNP leader alleged that the current government does not feel it necessary to make the common people and day- labourers happy since it has no accountability to them.

“There is no direction in the proposed budget to protect people from the Corona crisis. The finance minister has made the title of this year’s budget ‘Bangladesh towards a Resilient Future Protecting Lives and Livelihoods’. It sounds good, but there’s no specific proposal in the budget for cash support to save the livelihoods of the poor and day-labourers,” he observed.

The BNP secretary general expressed his discontentment as necessary allocation was not given to help the unemployed and those returned from urban to rural areas, and to develop the human resources and education sector.

He said that the health sector has not been given adequate allocation to deal with the coronavirus pandemic and improves the services.

“The allocation in the sector is within 1 percent of the GDP. It’s very sad. This allocation will not meet the demand of the health sector.”

The BNP leader expressed his discontent saying that though the finance minister talked about vaccinating 25 lakh people every month, no specific roadmap in this regard has been announced.

Fakhrul said appropriate measures have not been taken to promote the SME sector which generates the highest number of employment opprtunies.

The BNP leader said nearly one-third amount of the total budget will be borrowed from home and abroad to fill the deficit. “Around TK69,000 crore will have to be paid as interest on the loan in the next financial year. This budget will make the nation completely dependent on debt.”