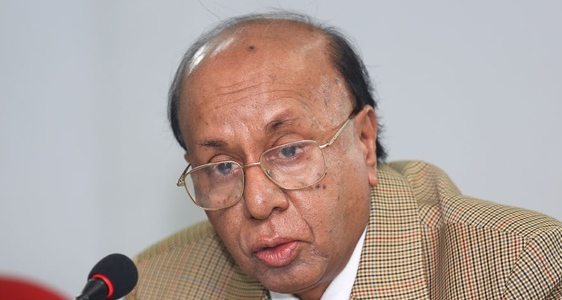 The government will not be able to execute the budget for 2021-22 fiscal year because of a lack of skills in the administration, believes AB Mirza Azizul Islam
Financing won’t be a big problem. The problem is spending the money on the right area at the right time,” said the former advisor to the caretaker government, pointing out that the local banks are eager to lend the government which will also get help from abroad.

Mirza Azizul praised the proposals made in the budget on Thursday to raise allocations for social protection, agriculture, and job generation amid the coronavirus pandemic. But he added, “I think the targets set in the budget are acceptable. But there is less possibility of getting the budget implemented.”

He thinks Finance Minister AHM Mustafa Kamal did not fully consider the administration’s lack of skills to implement a national budget of this scale when he planned the outlay.

“It’s true for both revenue collection and spending.”
Kamal is planning to rely on revenue collections to finance 65 percent of the proposed Tk 6 trillion spending plan. He has set a revenue target of Tk 3.89 trillion, about an 11 percent increase over the current fiscal year.

The government is seeking to raise Tk 3.3 trillion through the National Board of Revenue, with Tk 1.28 trillion coming from Value Added Tax. It also plans to draw an estimated Tk 160 billion from non-NBR sources, while the non-tax revenue is estimated at Tk 430 billion.

“The estimated deficit finally decreases because spending drops along with revenue. It won’t be difficult to make up the deficit.

“We are getting enough support from foreign sources. The domestic banking sector is also interested in lending the government. It will be good for them (banks) as the private sector lending rate has been cut,” said Mirza Azizul.