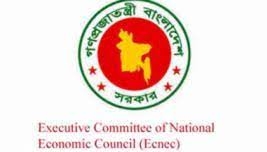 The Executive Committee of the National Economic Council (Ecnec) on Tuesday approved a Tk1,400 crore project to construct 30 modern silos, aiming to increase the overall paddy storage capacity by 150,000 metric tons in the country.

The approval came from an Ecnec meeting held virtually with its Chairperson and Prime Minister Sheikh Hasina in the chair.

Hasina joined the meeting from Ganabhaban, while ministers and officials concerned attended it from the NEC conference room.

The meeting approved a total of 10 projects involving the overall estimated cost of Tk6,651.34 crore, said Planning Minister MA Mannan while briefing reporters after the meeting.

“Of the cost, Tk5,219.81 crore will come from the state coffer while Tk794.03 crore from the own funds of the organizations concerned and Tk637.50 crore from foreign sources,” he said.

About the silo project, he said 30 steel silos would be constructed initially and later its number will be increased.

Paddy drying and preservation and other relevant facilities will be there in each 5,000-metric-ton modern silo, according to the factsheet provided by the Planning Commission.

The main objectives of the project are to raise the storage capacity by 150,000 metric tons under the government management, provide farmers with fair prices through direct procurement of their rice, incorporate modern technology in the government’s food management, maintain the nutritious standard of grains for two to three years without using pesticide.

The Directorate General of Food under the Food Ministry will implement the project in 30 upazilas under 24 districts at an estimated cost of Tk1,400.22 crore by June 2023.

Mannan said the prime minister directed the authorities concerned to construct such modern silos in the country’s southern region, especially in Bhola, Patuakhali, and Barguna as the production of food grains is high there.

The premier emphasized the practice of tissue culture in the country on potato seeds, vegetables, and other crops to improve the quality of production and thus attain self-sufficiency in food.

During the approval of the first revision of BPATC’s Enhancing Training Capacity with an additional cost of Tk348.61 crore, the prime minister stressed the need for extending the length of foundation (training) courses to 10 months instead of two to three months.

In reply to a question, the planning minister said the government is likely to conduct a perception survey again to determine the impacts of Covid-19.

Talking about the approval of construction of river port at Chilmari (Ramna, Jorgach, Rajibpur, Roumari, and Noyahut) with Tk235.59 crore, Mannan said the project in Chilmari would ultimately boost trade and commerce with the neighboring countries.

The other approved projects are the construction of Nolua-Baherchar 1.3km bridge over the Pandab-Paira River on Lakshmipasha-Dumki Road in Barisal with the estimated cost of Tk1,023.50 crore; Upgrading of Modhupur-Mymensingh national highway with Tk1,107.17 crore; Modernization and expansion of Bangladesh College of Physicians and Surgeons with around Tk215.43 crore; and protection of right embankment of the River Jamuna near Brahmangram-Hatpachil and adjacent areas under Shahzadpur upazila in Sirajganj and strengthening of Betil Spur-1 and Enayetpur Spur-2 with Tk647.49 crore.