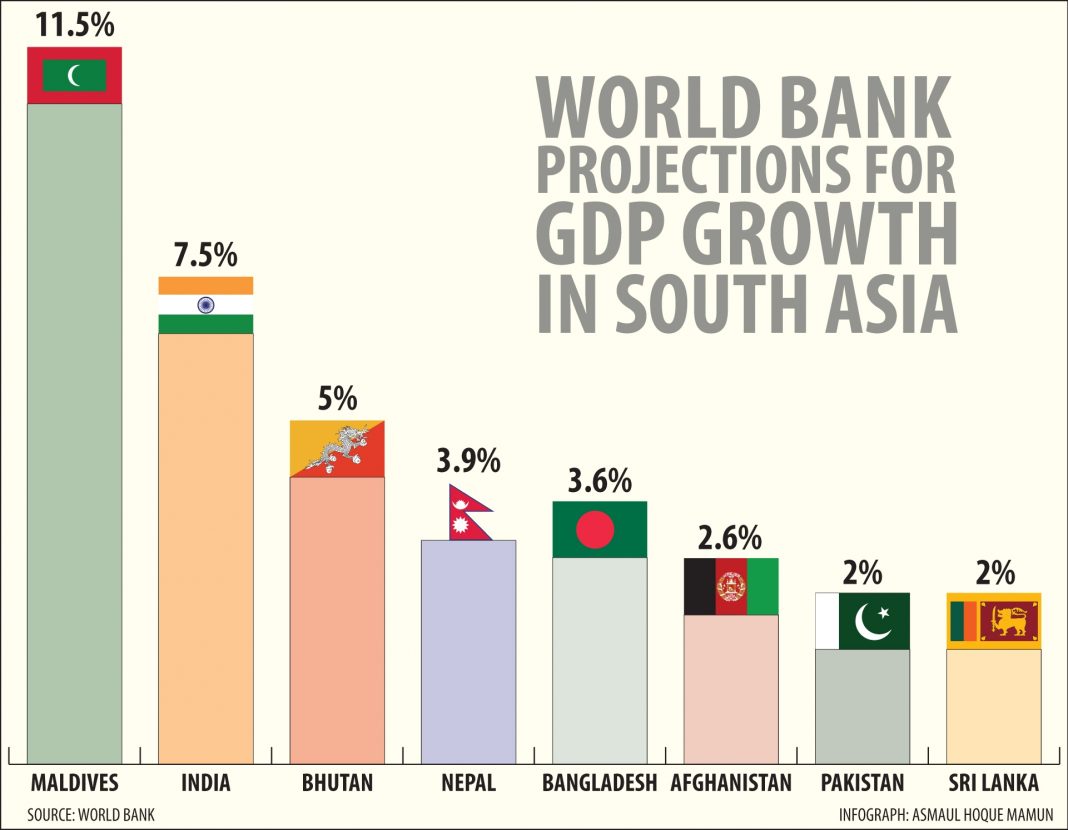 Government had set 7.2% growth in national budget while WB says will be 5.1% but the finance minister says it will be higher than government projections

The global lender also said that the country’s economic growth will be 5.1%, higher than their earlier forecast of 3.4%, as mentioned in “Global Economic Prospects,” their flagship publication.

This was refuted by Finance Minister Mustafa Kamal. He said Bangladesh’s economic growth will surpass their projections while speaking to the media after attending a meeting of the Cabinet Committee on Public Purchase on Wednesday.

The World Bank’s report also said that private consumption is the main engine of growth which is supported by normalizing activity, moderate inflation, and rising apparel exports.

While there is uncertainty regarding the stability of private consumption, Bangladesh’s growth is expected to experience a gradual recovery, the publication further mentioned.
Contrary to the World Bank’s projection, the Asian Development Bank (ADB) and the International Monetary Fund (IMF) had higher growth projection rates for Bangladesh for FY22, 7.2% and 7.5% respectively.

In the national budget for FY22, the government’s GDP growth target is 7.2%. The 8th five-year plan also targeted 7.7% GDP growth in FY22.

World Bank President David Malpass said: “How national governments, the private sector, and international institutions respond to the challenges of poverty, inequality, and climate change as we emerge from a crisis that has affected us all will be defining choices of our age.”
Economists react

“There is a data deficit. We still do not know what the growth rate was for the current fiscal year 2020-21. Although, every year a provisional growth rate is published through BSS this year we have not been provided with any such data. We do not have a base to compare the growth rate,” said Prof Mustafizur Rahman, distinguished fellow at the Centre for Policy Dialogue (CPD.)

“The World Bank has given us a “projection” of 5.2% GDP growth rate, although according to the government, the growth target for the current fiscal year is 6.1% and 7.2% for the next fiscal year. As per the proposed budget, and taking the trend for the last four years into consideration, the expected growth rate will approximately be around 5% or a bit more. With the country facing the second wave of the Covid-19 pandemic and its induced restrictions, we still face uncertainties from the adverse impacts that are still to unfold before us,” he also said.

Growth can be tricky and projections are not set in stone, as the former governor of Bangladesh Bank points out.

“The World Bank has given a very conservative projection of economic growth taking into account the current disruptions. But with the proposed budget and its proposed measures such as that of stimulus package and proper border control in response to any potential third wave of the pandemic might land the growth rate somewhere between 5.5% -6%, which is not bad,” said Salehuddin Ahmed, economist and former governor of Bangladesh Bank.

“But we should focus on increasing income and employment opportunities. The production sectors such as agriculture, livestock and fisheries should be developed rather than the services sector, as those have been a buffer for the economy. However, 7.2% growth rate would be very difficult to fulfill,” he added.
Where does the rest of South Asia stand?

South Asian economies are bouncing back as economic growth is set to increase by 6.8% this year, after contracting an estimated 5.4% in 2020.

But the recovery remains fragile, as amid this Covid-19 pandemic, the region is expected to see tens of millions more extreme poor — those living below $1.90 a day — by the end of this year and to have more than half of the new global poor created by Covid-19.

The report emphasized the uncertainty of the economic recovery stating, “All regions remain vulnerable to renewed outbreaks of Covid-19, which could feature variant strains of the virus; financial stress amplified by elevated debt levels; deeper-than-expected scarring from the pandemic; and rising social unrest, potentially triggered by rising food price”

“India’s recovery is being hampered by the largest outbreak of any country since the beginning of the pandemic,” the report stated.

Sri Lanka and Pakistan’s economy is expected to grow by 2% in FY22 from the previous year’s growth projection of 3.4% and 1.3% respectively.

In Afghanistan, 2.6% growth is expected in 2022 (December to December) compared to previous year’s growth projection of 1%.

However, Bhutan’s GDP will rise by 5% in FY22 (July-June) after a projected contraction in FY21.