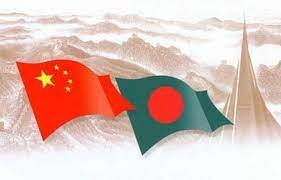 Out of around $12.09 billion bilateral trade in FY20, Bangladesh’s export to China only accounted for $0.60 billion while imports from China added up to a mammoth $11.49 billion

Speaking as a special guest, Jiming said both nations should consider an FTA combined with an investment deal.

The discussion, titled “Bangladesh-China Economic and Trade Relations in the aftermath of the COVID-19 Global Pandemic,” was organized jointly by Economic Reporters’ Forum (ERF) and Bangladesh China Chamber of Commerce and Industry (BCCCI).

Commerce Minister Tipu Munshi, who attended the virtual discussion as the chief guest, said though there has been some progress towards signing an FTA with China, more efforts are needed to conclude the negotiations and materialize the agreement.
“I believe this will help Bangladesh face the challenges of LDC graduation,” he said.

The bilateral trade between the two countries heavily favours China.

Out of around $12.09 billion bilateral trade in FY20, Bangladesh’s export to China only accounted for $0.60 billion while imports from China added up to a mammoth $11.49 billion.

Minister Tipu said as part of its unilateral market access schemes for LDCs, China has allowed duty-free access to Bangladesh for 97% of its tariff lines which became effective from July 1 last year.

Under this initiative, 8,256 Bangladeshi products enjoy zero tariff facility for exports to this market.

“I strongly believe that by fully utilizing this DFQF [duty-free, quota-free] facility, the trade imbalance can be reduced to a greater extent.”

The commerce minister said Bangladesh gives utmost priority to its relations with neighbouring and regional friendly countries like China while the relationship between the two countries has developed robustly based on mutual trust and interests.

Ambassador Jiming said both the entrepreneurs and businesses of China and Bangladesh suffered from the pandemic as the bilateral trade witnessed a fall of 13.6% last year from 2019.

He, however, termed attainment of Bangladesh’s 6.1% GDP growth in the outgoing fiscal year as “very encouraging”.

The Chinese ambassador said although there is a huge trade imbalance, there will be more exports from Bangladesh to China in the coming days.

He said he was fully confident that under the Chinese Belt and Road Initiative, there will be more areas of cooperation in different fields like 5G communication, high-speed railway as well as the G to G and PPP initiatives.

He said it would be a real game changer if Bangladesh could tap the potential Chinese market.

“If we can explore even 1% potential of the Chinese market, then the exports of Bangladesh to China will total $25 billion.”

Ambassador Mahbub Uz Zaman said there is an excellent platform for cooperation between the two countries for further consolidating the bilateral relations.

“Chinese investments to Bangladesh have been playing an important role and have also been contributing towards employment generation,” Mahbub said adding that the Chinese investors are looking forward to invest in the special economic zones in Bangladesh.

Razzaque suggested that Bangladesh increase its RMG exports to China. It can expand cooperation with China in artificial intelligence, robotics, and can set up a technological hub with China.

He said that establishing a full-fledged FTA is an option to retain the available market access in China, but it comes with reciprocity.
He said there are estimates to suggest that a comprehensive bilateral FTA would have an overall positive impact on Bangladesh’s exports by 22% of current exports to China.

On the other hand, Chinese exports to Bangladesh could increase by about 16%.

Any FTA deal with China should be backed by an investment agreement from which Bangladesh should be able to expand its exports and can keep bilateral trade deficits within reasonable, said Dr Razzaque.