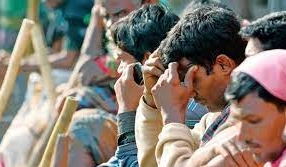 Finance Minister AHM Mustafa Kamal on Wednesday dismissed a claim that the coronavirus pandemic has resulted in the creation of 25 million new poor in the country.

“I do not believe that 20-25 million people are now below the poverty line. I need to know from where some research organizations have collected the figure,” he told a reporter after attending a meeting of the Cabinet Committee on Public Purchase.
He said the government has its own research bodies and they are now working on it.

“I will look into it when the government bodies complete their findings,” the minister added.

He said no figure will be acceptable before the government’s own research bodies’ present their findings.

Defending the proposed national budget for fiscal year 2021-22, the finance minister said his budget has no weak points.
Trashing the comments of some economists that the budget has failed to address the problems of coronavirus-affected low-income groups, he said everything in the budget is strong.

“You will see the results of the budget, that it would serve the interest of poor people when implementation starts,” he said.

He said he has followed the prime minister’s instruction to bring the poor people to the mainstream economy.