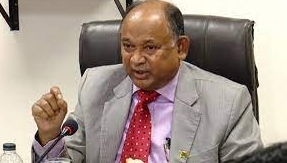 Railways Minister Nurul Islam Sujan has tied the knot at the age of 65, his second marriage after the death of his first wife.
The minister married Shammi Akter Moni, a law graduate and a native of Dinajpur’s Birampur Upazila. She works as an administrative officer at Cambrian School and College in Dhaka.

It was a “low-key” wedding ceremony at the bride’s home in Dhaka’s Uttara on Jun 5, Islam told bdnews24.com on Friday.

The minister is yet to take the bride home. He said he would scale down the planned reception ceremony in the light of the COVID-19 situation in Bangladesh.
His first wife, Nilufar Jahan, died in 2018 just before the eleventh parliamentary election. He has three children from his previous marriage.

Nurul Islam is also a graduate of Dhaka University’s Faculty of Law. He is currently in his third consecutive term as MP from the Panchagarh-2 constituency.

Curiously, his predecessor Mazibul Hoque also tied the knot at the age of 67 in 2014 after taking charge of the ministry.