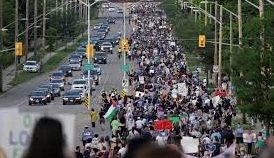 Thousands of people have rallied in Canada to denounce Islamophobia and express support for a Muslim family recently killed in a brutal attack described as a hate crime.

On Sunday evening, a driver plowed a pickup truck into a family of five in the Canadian city of London, Ontario Province, killing four of them and seriously injuring the other in an attack that targeted the victims because they were Muslims.

The family members were active members of London’s Muslim and Pakistani communities and the children attended the local Islamic school.

They had moved to Canada from Pakistan in 2007.