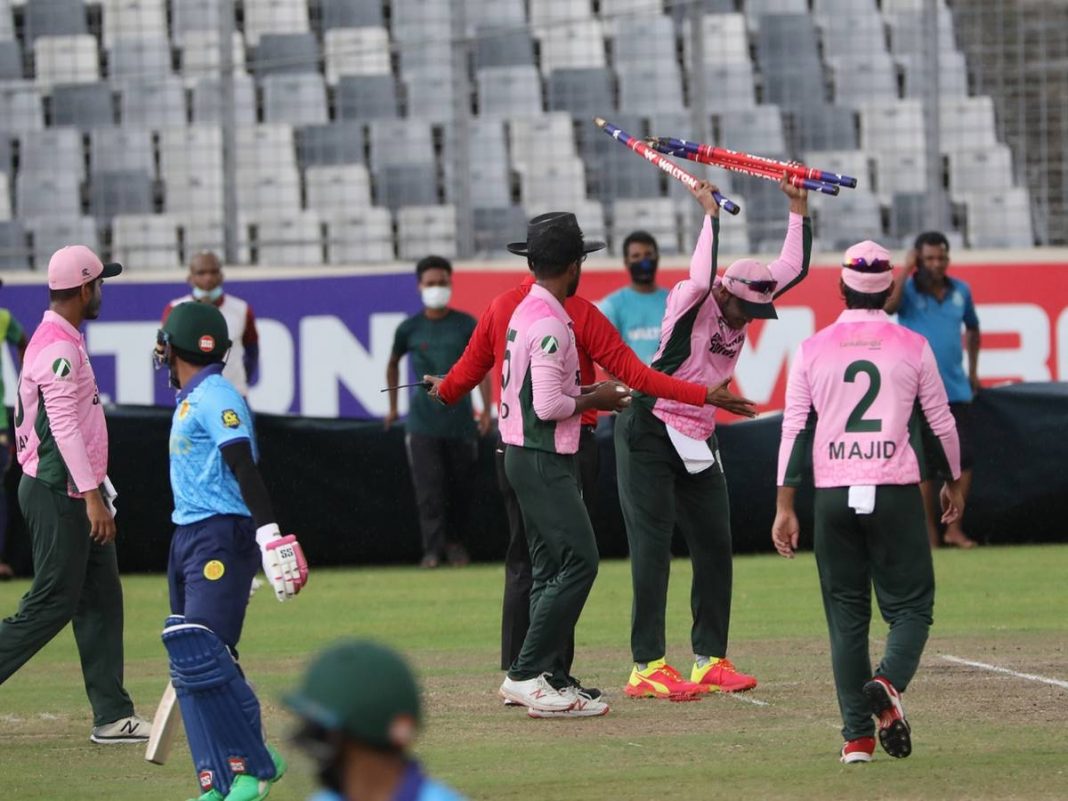 Shakib has been found guilty of breaching the BCB’s Code of Conduct twice, which the cricketer accepted

Shakib was found guilty of abusing the match officials and vandalizing equipment during the game between Mohammedan Sporting Club Limited and Abahani Ltd at Mirpur Sher-e-Bangla National Cricket Stadium Friday.

Mohammedan captain Shakib has been found guilty of breaching the Bangladesh Cricket Board’s Code of Conduct twice, which the cricketer accepted.

“We were waiting for the report from the playing conditions team, which involves match referee and match umpires. Based on the report there were two incidents, one during an LBW appeal in over 4.6 where Shakib had kicked the stumps (after umpire said not out). Another incident is from over 5.5 where the umpires had called the covers because of the rain. Here Shakib had removed the wickets,” said Cricket Committee of Dhaka Metropolis chairman and technical committee member Kazi Inam Ahmed to the media during a press conference Saturday.

“For the two offences he [Shakib] has breached Level 3 twice. Based on that, he has been sanctioned a three-game suspension and fined Tk5 lakhs. We did not require a hearing on this issue with Shakib as he has admitted to the breaches, agreed to the sanction and has signed the papers,” the BCB director added.
Shakib’s row of incidents started with kicking the wickets after umpire Imran Parvez turned down his lbw appeal against Mushfiqur Rahim.

An over later when rain started pouring down and the umpires decided to bring in the covers; Shakib lost his temper again as he pulled off all three stumps and threw them to the ground.

Shakib was also found in altercation with Abahani dugout while he was walking out of the field.

Abahani coach Khaled Mahmud was seen rushing towards Shakib, but the exchange between the two was unclear.

Mohammedan later won the game by 31 runs in accordance with the Duckworth/Lewis method and Shakib was seen in cordial interactions with the umpires.
The Bangladesh cricket star later apologized through a facebook post.

Shakib’s suspension however, will not mean big damage to Mohammedan in the remainder of the tournament.

According to reports, the left-arm all-rounder has already been granted leave by Mohammedan from Tuesday.

Shakib had cited that he needed to be with his family in the USA to rest his mind before travelling to Zimbabwe later this month with the Bangladesh cricket team.

Shakib might have gotten involved in yet another controversy, and receiving heavy criticism, but a fraction is also in support, suggesting that the cricketer has protested against the alleged on-field irregularities which benefit a few teams not only in the Dhaka League, but in the lower leagues too.
BCB director and CCDM chairman Inam informed that BCB president Nazmul Hasan has formed a committee to find out the irregularities, if any, and what needs to done to run the tournament smoothly.

The committee will be responsible to submit the report in the next BCB meeting, Tuesday.

“The board president [Nazmul Hasan] has called us and we spoke with him in details on the issue. He is very concerned and wanted us to find the root cause of this issue. We have a board meeting in three days time and he has asked us to do an investigation on the issue and present it to the meeting,” informed Inam.

“The board president has formed a committee for this which involves me, Jalal Younus, Naimur Rahman Durjoy, Sheikh Sohel and chief match referee Raqibul Hasan. We will sit with all captains and managers and listen if they have observation related to incidents and objection of this Dhaka League. The board president wants us to present a detailed report because he believes we will look to run the tournament properly,” he added.

“Many players had wanted the league to take place and the board has arranged it after spending a lot (money). The matches are now showed live on Pitchvision and Youtube. There has been a lot of improvement that took place. So after doing so much, what is the point of doing the league, the president has questioned. We will submit the report Tuesday where he will be able to see the decisions we need to take further,” Inam said.