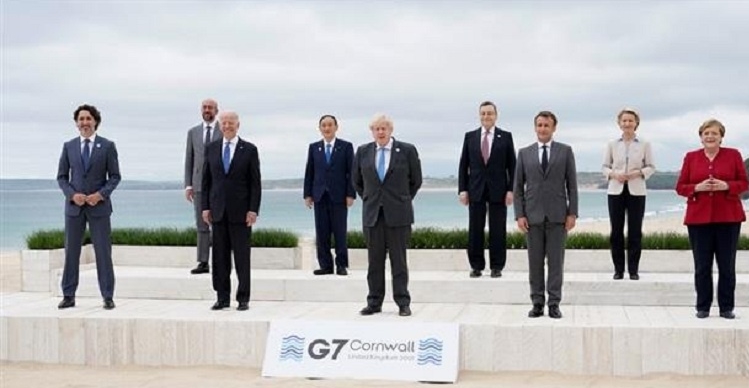 The Group of Seven’s adoption of a controversial agenda against China has escalated tensions, drawing a stern rebuke from Beijing about outdated assumptions that small groups of countries could still rule and make decisions for the rest of the world.

According to Press TV, leaders of the so-called Group of Seven (G7) largest economies have adopted an openly hostile anti-China stance, including a US-proposed rival plan to counter China’s multi-trillion-dollar Belt and Road initiative (BRI) by investing in infrastructure in developing countries.

The adoption of the Build Back Better World (B3W) project came after US President Joe Biden and other G7 leaders held their meeting in southwestern England on Saturday as part of attempts to confront China’s surging economic and military rise over the past four decades.

“This is not just about confronting or taking on China,” a senior official in the Biden administration said. “But until now we haven’t offered a positive alternative that reflects our values, our standards and our way of doing business.”

The White House said the B3W was meant to address “strategic competition with China and commit to concrete actions to help meet the tremendous infrastructure need in low- and middle-income countries.”

The White House added that the G7 initiative would be similarly global in scope, estimating that more than $40 trillion was needed for building infrastructure in developing nations in a “values-driven, high-standard and transparent” partnership.

“B3W will collectively catalyze hundreds of billions of dollars of infrastructure investment for low- and middle-income countries in the coming years,” it said.

Leaders of G7, which is comprised of the UK, Canada, France, Germany, Italy, Japan, and the United States, expressed hope that the plan would provide a transparent infrastructure partnership to help narrow the $40 trillion required for developing countries by 2035.

The White House underlined that the B3W initiative would also be used to mobilize private-sector capital in areas such as climate, health and health security, digital technology, and gender equity and equality.

It was not immediately clear how exactly the plan would work or how much capital would ultimately be allocated for it.

Chinese President Xi Jinping launched the BRI scheme in 2013, which involves development and investment initiatives that would stretch from Asia to Europe and beyond.

More than 100 countries have signed agreements with China to cooperate in BRI projects like railways, ports, highways and other infrastructure.

Xi’s critics and opponents of the BRI claim that creating a modern version of the ancient Silk Road trade route to link China with the rest of Asia, Europe and beyond is a vehicle for the “expansion of Communist China.”

Beijing has responded by saying such doubts betray the “imperial hangover” of many Western powers that humiliated China for centuries.