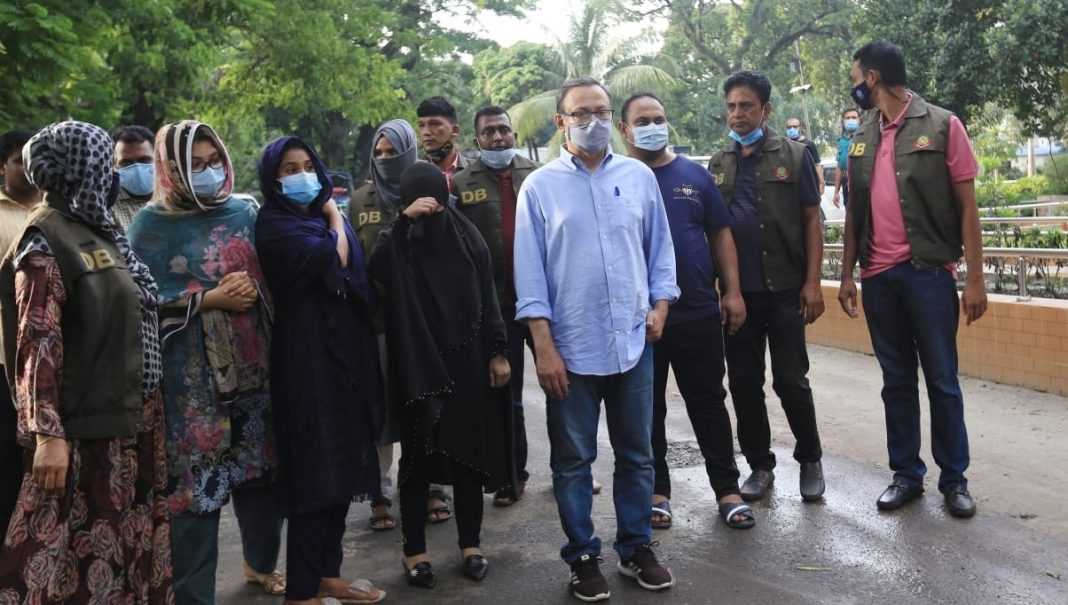 Police have arrested businessman Nasir U Mahmood on charges of attempted rape and murder brought by actor Pori Moni.

The Detective Branch (DB) made the arrest on Monday from the capital’s Uttara, hours after the Dhalywood star started a case with the Savar police station.

Four others have been also arrested with Nasir from a house at Uttara Residential Area, said Joint Commissioner Harun Or Rashid of the DB.
“They are now being taken to the Minto Road Detective Branch offices for questioning. They will be turned over to the Savar police after initial interrogation,” he said.

The other arrestees include businessman Omi, who has been named in the case by the actress, and three women, added the senior police official.

On Monday, Pori Moni filed the case after appearing before the media late on Sunday, when she claimed Nasir was among the people who tried to rape and murder her.

She initially brought the allegations in a Facebook post without naming the suspect before holding a press conference at her Gulshan residence.

Pori Moni alleged that she was sexually assaulted at the Dhaka Boat Club in Uttara on June 8.
Nasir, who is involved with real estate business, is the entertainment and cultural affairs secretary of the club.

“Nasir U Mahmood, former president of Uttara Club Ltd and a businessman named Omi wanted to rape and murder me,” the actress told media.

Pori Moni claimed she, along with Omi and a make-up artist named Jimmy went to the club on night of June 10, when she was introduced to some of Omi’s acquaintances, who were drinking.

Nasir and the people with him offered her a drink, but she declined, saying that she was feeling unwell.

They tried to force her to drink, she alleged.

One of them forced the neck of a bottle into her mouth and started touching her inappropriately, claimed the actor before adding when she resisted, they beat her up as well.
The Dhallywood actor claimed she was able to get out of the club around two and half hours later and went straight to the Banani police station, but the officials there did not lodge her complaint.

Pori Moni, who joined the movie industry in 2015, has played the lead female role in over 20 movies.

She is best known for her work in Giasuddin Selim’s “Swapnojaal” (2018). She is also set to play Pritilata in upcoming film, “Pritilata Waddedar” to be helmed by Rashid Palash.

Forbes magazine last year named her as one of 100 Digital Stars of Asia.

Before appearing before the media late on Sunday, the actor took to Facebook seeking justice from Prime Minister Sheikh Hasina.

“I was physically assaulted. There was an attempt to rape and murder me. I want justice,” she wrote.