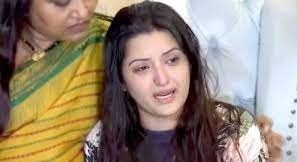 Film actress Shamsunnahar Smriti, popularly known as Pori Moni, has accused a businessman of trying to rape and murder her.
Pori Moni initially brought the allegations in a Facebook post without naming the suspect on Sunday. Hours later, she held a media briefing and named Nasir U Mahmood, entertainment and cultural affairs secretary of Dhaka Boat Club, as her attacker.

Nasir assaulted her at the club in Dhaka’s Uttara four days ago, the actress alleged.

He could not be reached immediately for comments. One of his mobile phones was unreachable, while the other was picked up by an employee of Uttara Club, who said he had no idea about the incident.

A founding member of the Dhaka Boat Club, Nasir is involved with the real estate business. He is also a former president of the Uttara Club.

Pori Moni also claimed she tried and failed to get justice after she complained about Nasir over the incident to Inspector General of Police Benazir Ahmed, president of the boat club. Benazir was unavailable for comment.

Sohel Rana, an assistant IGP, said: “She did not contact the IGP. It’s unclear why she named the IGP.”

“The police will take action when the actress contacts them,” he said.

Nasir identifies himself as a “friend” of Benazir, according to Pori Moni.
She also alleged that Banani police did not record the case when she tried to file a complaint.

Nure Azam Mia, OC of Banani Police Station, however, denied the allegation. He said no one named Shamsunnahar Smriti or Pori Moni approached them to start a case.

Pori Moni, who is a Narail native, rose to fame fast after joining the movie industry in 2015. She has played the lead female role in two dozen movies.

Forbes magazine last year named her as one of 100 Digital Stars of Asia.
She took to Facebook seeking justice from Prime Minister Sheikh Hasina over the alleged attempt of rape and murder. “I was physically assaulted. There was an attempt to rape and murder me. I want justice,” she wrote.

Later, she told bdnews24.com by phone that she was “not doing well”. “No one would realise what has happened to me if they did not face such an incident.”

After another hour, she appeared before the media at her Gulshan home