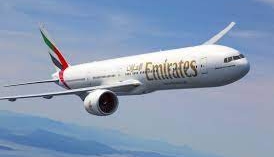 Emirates got an additional $1.1 billion in state support from Dubai after a collapse in long-haul travel due to the coronavirus pandemic triggered the airline’s first annual loss in more than three decades.
Governments have pumped billions of dollars into airlines to keep them afloat during the pandemic and state-owned Emirates has now received $3.1 billion in equity injections from Dubai, including $2 billion disclosed last year.

The airline reported a $5.5 billion loss on Tuesday for the year ending on March 31, after making a $288 million profit the previous year, as revenue plunged 66 percent to $8.4 billion.

It was the airline’s biggest annual loss, and only its third ever following losses in 1987-88 and 1985-86, its first year in operation, an Emirates representative said.

Emirates said the government, its sole shareholder, would continue to support the airline that has transformed Dubai into a major international travel hub over the past three decades.
Fellow Gulf carrier Qatar Airways, which is due to report results for its fiscal year ending March 31, has also received $3 billion from its state owner.

Emirates and Qatar Airways have no domestic markets to cushion against border restrictions and closures introduced to stop the spread of COVID-19. While vaccination programmes have put some economies on the road to recovery their slow rollout globally has put international airlines at a disadvantage.

Emirates Chairman Sheikh Ahmed bin Saeed Al Maktoum said the recovery from the pandemic would be patchy, cautioning that no one could predict when the industry’s worst crisis would end.

Emirates said it had filled just 44.3 percent of seats on flights in the past year, down from an average of 78.4 percent a year earlier. It carried 6.6 million passengers, its lowest in two decades.
The airline cut capacity by 82.6 percent compared with the previous year as it centred operations around its 146 Boeing 777s – 19 of which have been stripped of seats to carry more cargo as the pandemic drastically hit passenger demand.

Most of the airline’s 113 Airbus A380s have been grounded. Four more have been removed from operation and are unlikely to return before their scheduled retirement, it said.

Emirates Group, the airline’s holding company that includes other aviation and travel assets, saw revenue fall 65.8 percent to $9.7 billion and it made a loss of $6 billion, its first.