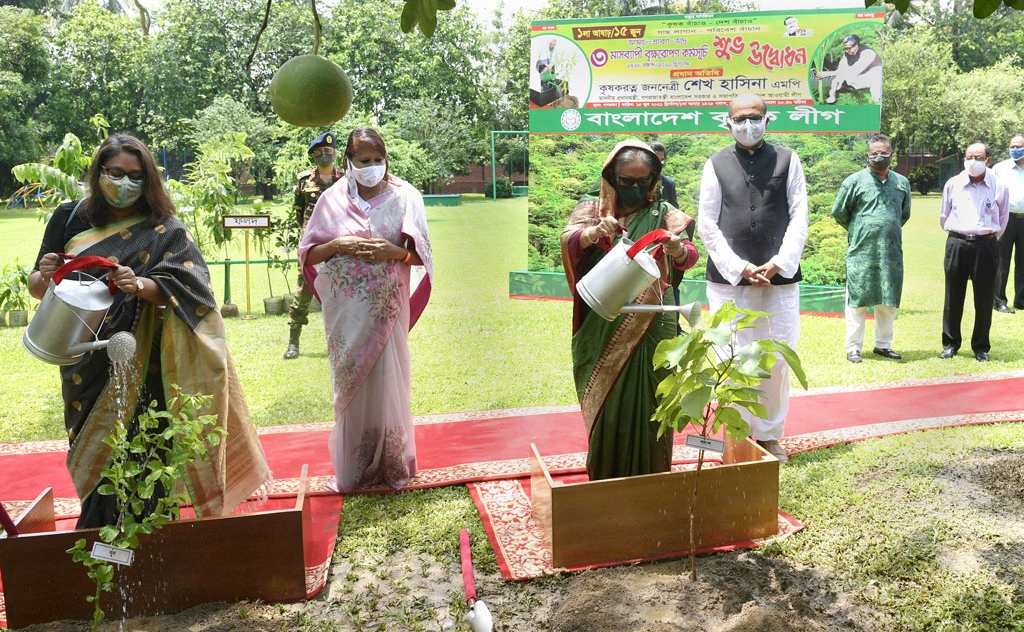 Prime Minister Sheikh Hasina on Tuesday called upon all, including the leaders and workers of Awami League and its associate bodies, to plant at least three saplings to make Bangladesh a much greener country.

She made the call while inaugurating the three-month-long tree plantation campaign of Bangladesh Krishok League at her official residence Ganabhaban in Dhaka.

The government wants to ensure the overall economic development of the country keeping its environment and surroundings protected, Hasina said.

Hoping to see a livelier and much better environment in the country, she mentioned that the government is implementing various programs to this end.

The prime minister said the forestation in Bangladesh now has gone up to 22% from a mere 7% due to massive afforestation across the country during her governments.

Besides, gardening programs are also on in every house of people alongside social afforestation to further advance the initiative of the government, she added.

Hasina said such steps will help improve the country’s environment alongside expanding afforestation, and this is how Bangladesh will be able to set an example in the world.

She requested the leaders, workers and well-wishers of Awami League and its associate bodies as well as those who believe in Bangabandhu’s ideology to plant at least one fruit, one wood and one medicinal saplings.

Hasina said these trees will ensure the economic and nutritional security of people alongside protecting the country’s environment.

Earlier, the prime minister inaugurated the three-month-long tree plantation campaign by planting a Palash sapling on the compound of Ganabhaban.

Her daughter Saima Wazed also planted a plum sapling at the time.