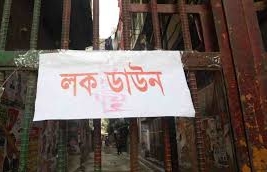 The government has again extended the ongoing curbs on public movement and gatherings in a bid to prevent the further spread of Covid-19, which has killed over 13,200 people across Bangladesh so far.

The nationwide restrictions was supposed to end on Wednesday, as per the gazette notification issued on June 6.

But now, with the fresh directive, the ongoing restrictions will remain in place until July 15, said a notification issued by the Cabinet Division on Wednesday.

During the period, all tourist spots, resorts, community and entertainment centres have been asked to remain closed. No social, political and religious gathering will be allowed either, the notice says.

All government, non-government and autonomous organizations, banks and other financial organizations will be open while maintaining health guidelines.

The Bangladesh Bank has extended transaction hours till 3:30pm, according to the latest notice issued by the central bank on Wednesday.

All types of public transport, including long-haul services, will be allowed to operate at half capacity. But everyone concerned, including passengers, drivers and their assistants, will have to wear face masks and follow the health safety rules.

All restaurants and eateries will be allowed to offer dine-in facilities at half capacity between 6am and 10pm every day. They will also continue to provide online, takeaway or home delivery services.
As Covid-19 cases kept growing at an alarming rate since mid-March this year, the government was forced to impose a nationwide lockdown for one week from April 5 to contain the spread.

Later, a stricter set of restrictions on public movement and gathering were announced from April 14 to 21.

Since then, the restrictions have been extended several times considering the situation.

Although shops and malls were instructed to shut down at the beginning of the restrictions, the government eventually allowed them to open in a limited capacity amid a growing demand from shop owners and employees.

The ban on public transport was lifted on May 6, with the provision of operating in 50% capacity.

The government eased the ban on long-haul public buses, trains and launches on May 24.

As of Wednesday, Bangladesh recorded 837,247 cases and 13,282 deaths from the deadly disease since March last year.

With public transports operating, shopping malls and shops open, and Covid-19 cases soaring in frontier districts because of the highly contagious Indian variant, experts fear that Bangladesh may face the worst outbreak of the deadly virus at the end of June.