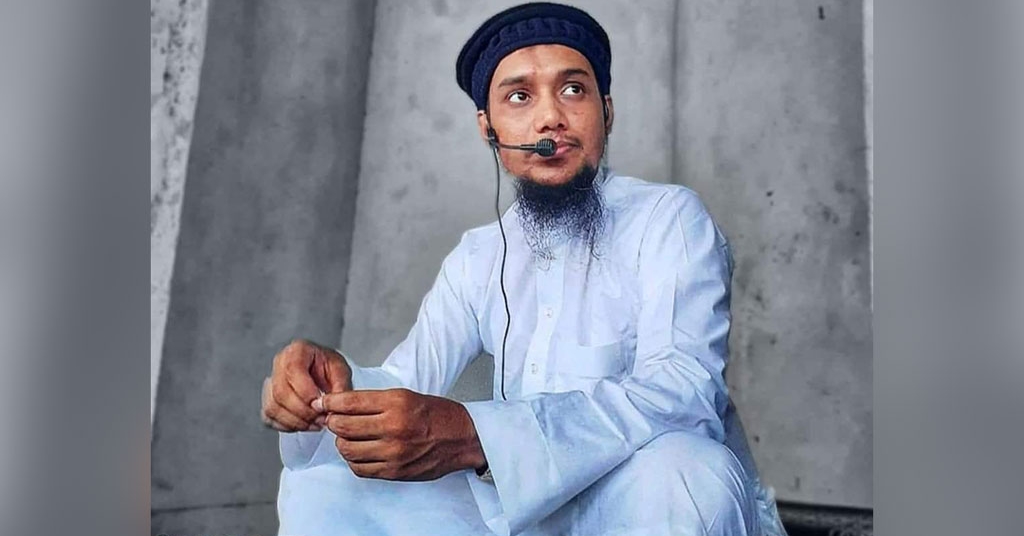 Adnan could have been targeted for his lectures on geo-political issues, she suspects

The wife of Rangpur-based Islamic orator Afsanul Haque Adnan, whose disappearance has lately raised serious concerns, has claimed that Adnan’s car was followed by two motorbike riders before he went missing from Gabtoli.

“Adnan left Rangpur for Bogra to attend a program scheduled at 3:30pm on June 10. But he did not attend the event and departed for Dhaka. I cannot contact the organizers as they did not have any poster for the program,” Sabikunnahar said at a press conference at Dhaka Reporters Unity (DRU) on Wednesday.

“Firoz and Muhid were with him as associates, while the car was driven by its owner Amir,” she said. Adnan called his wife at around 4pm and told her that two people on a motorbike were following the car.

“’Pray for me,’ this is what he said,” the wife told reporters. After 20 minutes, Adnan called her again and told her that they were not being followed anymore. “He asked me to prepare dinner,” she said.

Home Minister Asaduzzaman Khan Kamal on Wednesday said that the law enforcers had taken the issue of Adnan’s disappearance seriously.

“We are aware of the situation and looking for clues,” the minister told reporters at an event in Gazipur.

Earlier, Sabikunnahar wrote to the prime minister and went to the offices of the Detective Branch of police, the Rapid Action Battalion (RAB) and Police Headquarters. She personally met the Rab chief, who told her that the force did not have Adnan in its custody.

Sabikunnahar said that Adnan had shared his live location at 2:37am (June 11) via WhatsApp from Gabtoli, around 18 minutes away from home. She found his phone switched off at around 3am. Amir’s phone could not be reached either.
She said that Darussalam police refused to register a general diary, saying that the location was not under their jurisdiction. Pallabi police initially refused to file the GD, but later registered the complaint. Adnan’s mother filed a GD with Rangpur Kotwali police station.

Darussalam police told Dhaka Tribune that they had not found anything through analyzing CCTV footage from Gabtoli.

Sabikunnahar suspects that someone had targeted her husband, better known as Abu Twa-haa Muhammad Adnan, for his lectures on geo-political issues, shared widely on YouTube and Facebook by his followers.

“It’s my assumption… Many people have criticized his lectures previously. He might have been under pressure or gone missing because of that reason. He sometimes discussed geo-political issues that are linked to Judaism. He could have been picked up by any international intelligence agency.”

Asked for details, she said: “He used to deliver sermons about the recent Israel-Palestine crisis.”

Dr Abu Bakar Muhammad Zakaria, an Islamic scholar, and Adnan were in “open rivalry” lately over their religious teachings and ways of preaching. Both have posted videos on YouTube and Facebook targeting each other.

In a recent video, Adnan had called for unity of all Muslims and asked his followers not to act aggressively against those who were opposed to his views because it would strengthen the enemies of Islam.

Adnan said: “We’ll work for the Muslim Ummah. We’re part of a family… But we’ll snatch Jerusalem from the Zionists. We want to see the destruction of the pharaohs. We’ll join the Imam Mahdi… the brothers in Khorasan… and the Caliphate when it’s restored.”

Sabikunnahar said Adnan was not involved with any political party. “Perhaps a misunderstanding has happened. Please let me live a sound life,” she said.

“Three more people went missing with Adnan. I contacted their families and asked them to attend the press briefing, but they declined to do so,” she said.

“On the day he went missing, I was told by someone that I would get back Adnan if I erased all the records of his location shared with me. I was warned not to talk to the media,” she alleged.

“The authorities must expeditiously and fairly investigate to determine their whereabouts. If they are in state custody, they must be released immediately.”