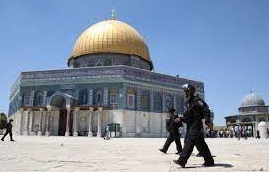 The far-right Israeli settlers marched through occupied al-Quds on Tuesday to commemorate the regime’s seizure and subsequent occupation of East al-Quds in 1967.

Palestinians view the so-called “march of the flags” as provocative as Israeli settlers display their dominance over the occupied region.

The protest was met by force and saw a child and a female journalist injured by rubber bullets fired by Israeli forces at the demonstrators, according to Wafa news agency.

The Palestinian Red Crescent Society said nine Palestinians were wounded and four others were arrested at al-Aqsa Mosque compound on Friday.

Jordan, the custodian of Muslim holy sites in al-Quds, condemned the Israeli attack on the Palestinian worshipers.

Jordanian Foreign Ministry spokesperson Daifallah al-Fayez said the actions of the Israeli regime police constitute “a flagrant violation of the sanctity of al-Aqsa Mosque and safety of worshipers”.

More than 600,000 Israelis live in over 230 settlements built since the 1967 Israeli occupation of the West Bank and East al-Quds.

All Israeli settlements are illegal under international law as they are built on occupied land. The United Nations Security Council has condemned Israeli regime’s settlement activities in the occupied territories in several resolutions.