Government’s focus is on both life and livelihood:PM 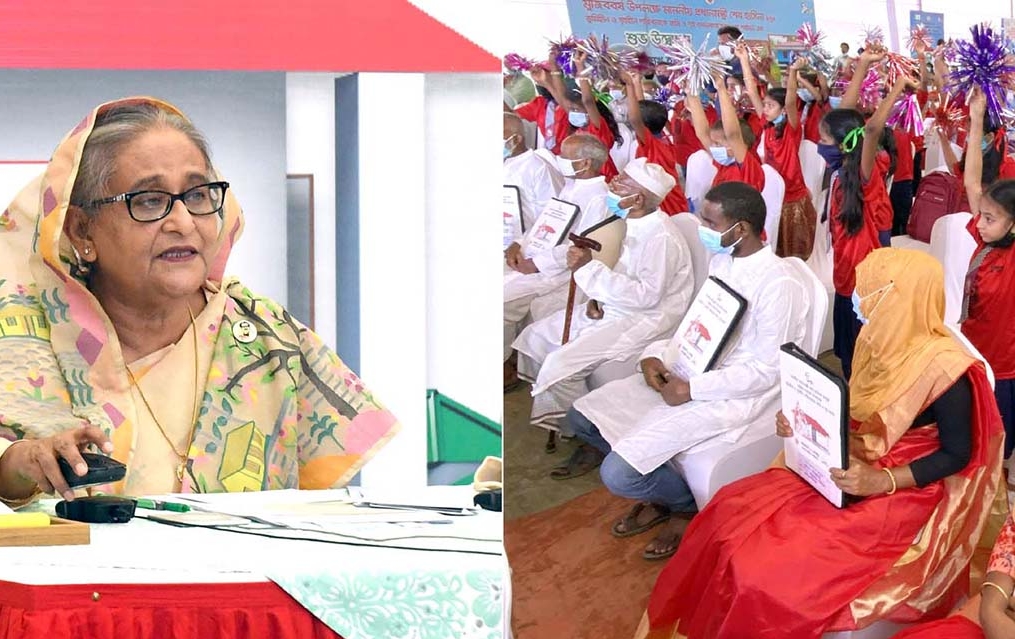 The government is trying to help the ultra-poor in every way possible, says the premier

Prime Minister Sheikh Hasina on Sunday said the government with its limited resources is trying to improve the lifestyle of the people at the grassroots.

“With our limited resources, we’re trying to reach the common people and grassroots ones for improving their lives and livelihoods. That’s our aim,” she said.

Sheikh Hasina said this while distributing 53,340 well-built semi-pucca homes along with land ownership documents among homeless and landless families across the country in the second phase under the Ashrayan 2 Project.

The prime minister virtually joined the distribution program from her official residence Ganabhaban.

Hasina said the government, since assuming power, has been trying to help the ultra-poor in every way, and the result of which is now visible. “The ultra-poor are gradually learning to stand on their feet…they’re coming up…that’s what we want.”

She mentioned that the government’s main target is to improve the living standard of the people at the grassroots by engaging them in livelihood activities.

The economic policy of the government is to ensure resources up to the rural level in addition to ensuring their access to education and healthcare, Hasina said adding, “That’s the policy of the Awami League and that’s what the Father of the Nation Bangabandhu Sheikh Mujibur Rahman taught us.”
“When one gets a home, he or she is thrilled with joy and happiness, and that becomes visible on their smiling faces. I want nothing more than that,” she said.

The premier said the departed soul of Bangabandhu will be at peace when shelters will be ensured for every individual of the country.

She said natural calamities like cyclone, tidal surges, riverbank erosion, and flooding cause sufferings to people and leave them homeless frequently as Bangladesh is a calamity-prone country.

“Our aim is to ensure homes for them, rehabilitate them by ensuring livelihood options for them.”

The prime minister said that the government has set its goal to make Bangladesh free from poverty and the government is doing everything to achieve that.

Local public representatives and public servants, on behalf of the prime minister, handed over the joint ownership documents of the two-decimal houses to both husbands and wives ensuring gender equality.

Principal Secretary Dr Ahmad Kaikaus conducted the program and made a power-point presentation.

A song describing the project was also played during the event.

Later, the premier talked to the beneficiaries who joined the event virtually from different parts of the country.