Zero tolerance for traffickers of women and children: BGB chief 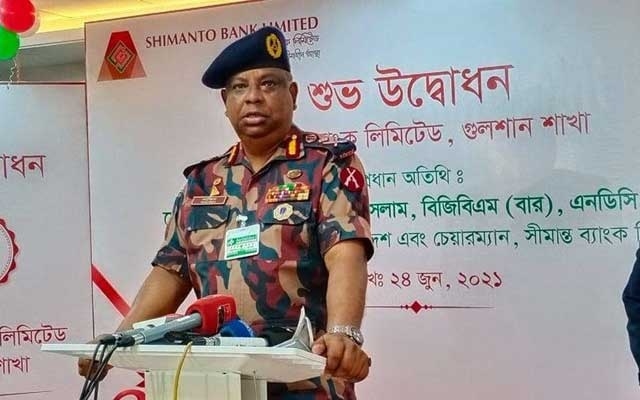 Border Guard Bangladesh will not show leniency for anyone involved in the trafficking of women and children, says Maj Gen Md Shafeenul Islam, director-general of the agency.
The BGB has a zero-tolerance policy for traffickers of women and children and those involved in drugs,” the BGB chief said during the inauguration of a branch of Shimanto Bank at Dhaka’s Gulshan on Thursday.

“The husband of a Satkhira female ward councillor was arrested over allegations of human trafficking,” he said. “We are conducting raids on the house every day to catch the ward councillor. We have informed the police as well.”

“The police and BGB work under the same ministry and we support each other in maintaining law and order and in protecting our border.”

The BGB chief also called for the support of the media and the public in preventing human trafficking.

“The media plays a big role in preventing the trafficking of women. We must raise public awareness on this issue. All of society should be alerted so that no victims are lured into the clutches of traffickers.”
Islam also spoke of several hundred people taken into custody at the border recently.

“In the past month, about 300 people have been caught crossing the border illegally in Jhenaidah’s Moheshpur, Satkhira and Chuadanga. They have been put under quarantine. Once their quarantine is complete, they will be turned over to police.”

“In addition, Rohingya people are regularly crossing the border illegally from Myanmar. Three Rohingya people came by boat just yesterday. They were returned to Myanmar that very night.”

Regarding coronavirus prevention efforts at the border, he said a 14-day quarantine is mandatory for those crossing the border into Bangladesh. Bangladesh’s borders span 4,427 km and the distance between two border outposts is 5.7 km. “Patrol teams are deployed at each BOP, but it isn’t possible to cover 100 percent of the area,” Islam said.

BGB personnel are at higher risk of catching the coronavirus as they are stationed in border areas.

Asked how many members of the border force are currently afflicted, Islam said: “The BGB has over 65,000 personnel, who mainly work in border areas. BGB personnel follow health protocols in a strict manner. As of Wednesday, the infection rate among personnel was 1 percent. Before that, it had been as low as 0.70 percent.”