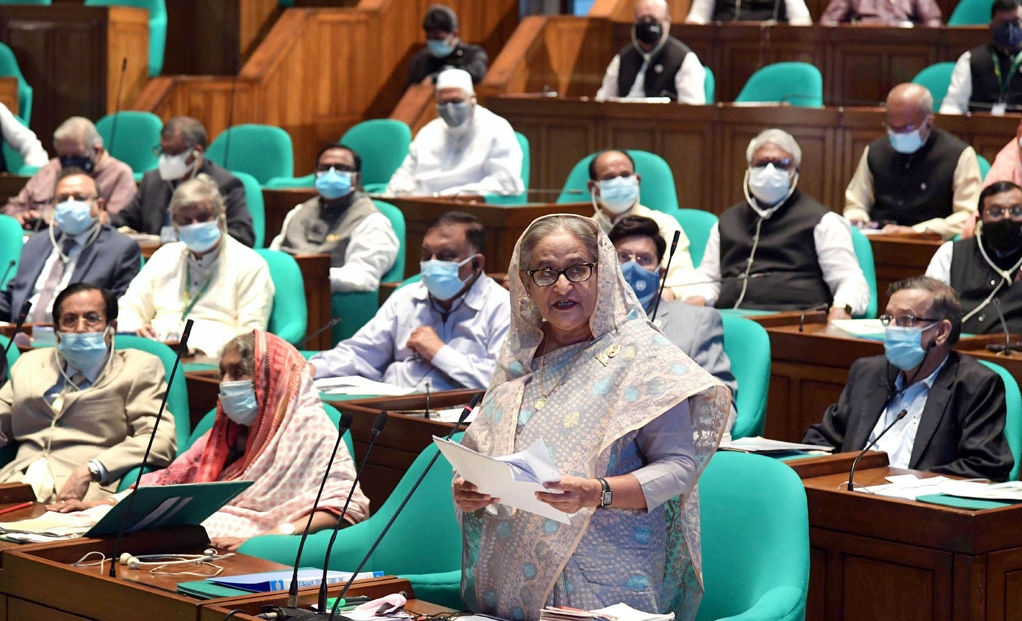 Massive vaccination drive will begin across the country in July, says the premier

Prime Minister Sheikh Hasina on Tuesday vowed to allocate any amount of money required in order to purchase Covid-19 vaccines and ensure free inoculation for all.

Assuring that a massive vaccination drive will begin in the country in July, she said: “I’ve already announced that the government will ensure free vaccination for all. We’ll provide funds, no matter how much is needed, to collect the necessary vaccines to this end.”

“We’ve taken a plan to bring 80% of people under the vaccination coverage in phases,” she added.

Hasina told the House that the government started contacting the countries developing vaccines when it was at the research stage and provided money to book vaccines.

But, she said, Bangladesh fell into trouble to some extent for the time being as India banned vaccine export after a massive surge in coronavirus infections there.

“Now we’ve managed it. There’ll be no problem for us anymore (in collecting vaccines),” said the prime minister.

Mentioning that the government is in touch with China, Russia, the US and all other vaccine-producing countries and companies, she said her government has already collected 11.4 million doses of vaccines from different sources.

“We expect that more vaccines would come in this July and we’ll start the vaccination on a massive scale,” the prime minister added.

She stated her conviction that Bangladesh will be able to implement the 2021-22 fiscal year budget planned for the people despite the hurdles posed by the Covid-19 pandemic, and thus the country will move one step ahead towards prosperity.

“The finance minister has placed the 2021-22 financial year’s budget giving priority to the lives and livelihoods of the people. I believe we will be able to implement the budget and thus Bangladesh will go one step forward [towards prosperity and development],” she said, taking part in the general discussion on the budget as the Leader of the House in the 13th session (Budget Session) of the 11th Parliament, reports BSS.

The socio-economic advancement of the masses has been prioritized in the budget, though the world economy has been stalled due to the Covid-19 pandemic, the prime minister further said.

Referring to the upward trend of various economic indexes, she said Bangladesh’s economy is now on the way to complete recovery due to measures taken by the government under 23 stimulus packages though the effect of the Covid-19 second wave still persists.

Hasina pledged to stand by the people, saying that if required her government would take prompt measures to improve the lives and livelihoods of the people and ensure the country’s economic recovery.

She added: “I, through you [members of parliament], would like to assure the people that the government is always beside them amid the crisis and will remain beside them.”

The prime minister said the government would make its way towards building a “Sonar Bangla,” free from poverty and hunger, as dreamt by the Father of the Nation Bangabandhu Sheikh Mujibur Rahman, while implementation of over the budget, which is over Tk603,681 crore, would be part of that endeavour.

She expressed her firm determination that Bangladesh would once again advance towards development by offsetting the economic impact of the global pandemic.

Referring to the people who are criticizing the prime minister and the government, she said she doubts whether the critics could actually realize the gravity of the global situation arising due to the Covid-19 pandemic.