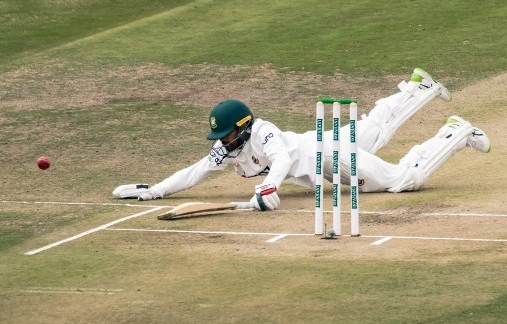 The visitors lost two more wickets post lunch, in Mushfiqur Rahim [11] and Shakib al Hasan [3]. After 34 overs the score was at 124 for 5

Visiting Bangladesh had a shaky start choosing to bat first in the lone Test of the series against hosts Zimbabwe at Harare Sports Club on Wednesday. At Lunch on day one, Bangladesh were able to 70 runs on the board losing three wickets.

In the morning, Bangladesh lost opener Saif Hassan [0] and Najmul Hossian Shanto [2] with only eight runs on the board before captain Mominul Haque and Shadman Islam stitched a 60-run stand for the third wicket.

Zimbabwe pacer Richard Ngarava removed Shadman on 23 to break the partnership three overs before the stroke of lunch. Mominul remained unbeaten on 32 with Mushfiqur Rahim on one.

Bangladesh since their return to international cricket post Covid-19 at the start of this year have played four Tests and lost three, while one ended as draw.
It started with defeats against the West Indies at home in the two-match series, while in Sri Lanka the side lost the second game after having put up some competitive cricket in the first game of the series.

Superstar allrounder Shakib al Hasan has mad a comeback to the Test team after missing out on the second Test against the Windies due to injury, and then the two games in Sri Lanka having preferred to play in the Indian Premier League Twenty20.