Afghan women take to streets with weapons to protest against Taliban 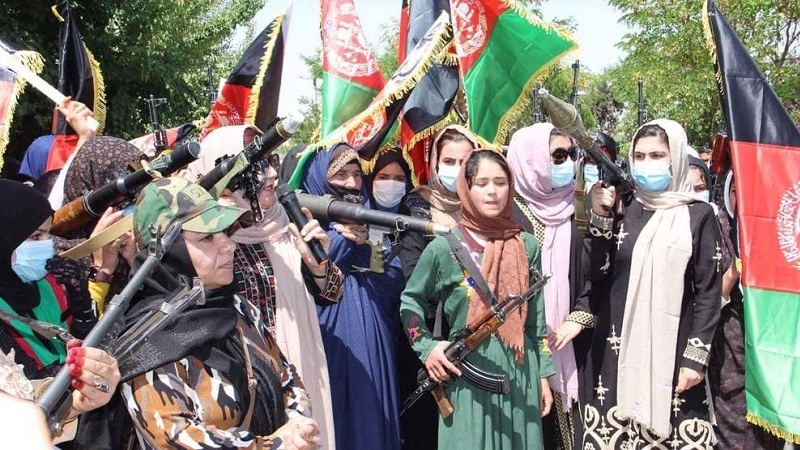 Armed Afghan women have taken to the streets in the north and central regions of Afghanistan to protest against Taliban as the militant group continues to fight in an attempt to overrun more territory across the war-ravaged country.

Pictures of hundreds of women with assault rifles, waving their guns and chanting anti-Taliban slogans in central Ghor Province, where one of the biggest demonstrations was held, went viral on social media on Thursday.

“There were some women who just wanted to inspire the security forces, just symbolically, but many more were ready to go to the battlefields,” Halima Parastish, an organizer of the protests in Ghor said. “That includes me, and some other women; and I told the governor, about a month ago, that we are ready to go fight.”

The public demonstrations come at a time when the Taliban militants are advancing on the ground, capturing district after district, particularly in the north of Afghanistan.

The Taliban have already brought in restrictions on women’s education and their freedom of movement in the areas they control, according to the residents of those areas. The protests by the armed women was thus an emphatic show of defiance.

“No woman wants to fight, I just want to continue my education and stay far away from the violence, but conditions made me and other women stand up,” said a journalist in her early 20s from the northern province of Jowzjan.

It is rare, but not unprecedented, for Afghan women to take up arms, especially in slightly less conservative parts of the country. But they are unlikely to head to the front-lines in large numbers anytime soon due to both social conservatism and lack of training.

Meanwhile, Afghan troops have recaptured government buildings in the western city of Qala-i-Naw, the provincial capital of Badghis, which was attacked by the Taliban a day earlier.

“The enemy suffered heavy casualties and now we are advancing and driving the enemy out,” Special Forces Commander Sayed Nezami said.

An unnamed spokesperson from the Ministry of the Interior also said the city had been cleared of Taliban militants and was now fully under the control of Afghan security forces. A news report by Tolo also quoted the city’s provincial governor as saying that the Taliban had been “pushed back from several parts of the city.”

The militants launched the assault on Qala-i-Naw and managed to take control of the police headquarters and offices of the intelligence agency, the National Directorate of Security, on Wednesday. The attack on the city marked the first time the group attempted to overrun a provincial capital since the withdrawal of foreign forces began.

The Afghan government has vowed to retake all the territory that has been overrun by the Taliban.

On Tuesday, the government deployed hundreds of commandos to the battlefield in the northern provinces of Takhar and Badakhshan, where the Taliban have captured large swathes of territory.