8 including Sajeeb Group MD and sons remanded after arrest 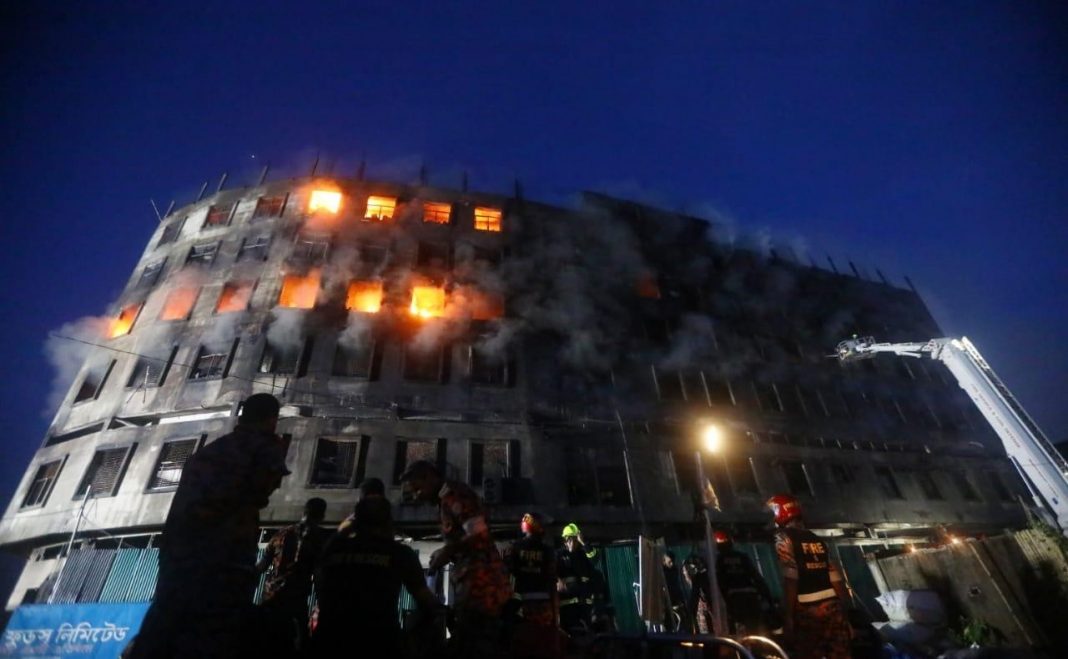 Eight people, including the owner of Sajeeb Group and his sons, have been arrested and remanded in a case filed over Thursday’s fire that has killed 52 people so far at a factory in Rupganj, Narayaganj.

Home Minister Asaduzzaman Khan Kamal on Saturday said the owner, several directors and managers of Sajeeb Group and its sister concern Hashem Food Ltd were among those taken into custody by police.

He made the disclosure while talking to the reporters after visiting the gutted factory in the Kornogop area of Bhulta, Rupganj.

The home minister said that no one will be spared if their negligence was found over the incident, which also left more than 50 people with different kinds of injuries. “All responsible persons will be brought to book,” he added.

He said the Home Ministry has formed a committee to look into this incident. “The probe report will be submitted very soon and action will be taken quickly as well.”
Earlier on Saturday, media reports said, police had picked up Hashem and his sons from their Gulshan residence in Dhaka and took them to the Rupganj police station.

Azad was arrested from the company’s head office in Dhaka’s Farmgate area, said SP Jayedul Alam, who was with the home minister at the time.

They were shown arrested in the afternoon in a case filed by police at Rupganj police station over the charges of murder and attempt to murder, confirmed the SP. Bhulta police outpost In-Charge Inspector Nazimuddin Mozumder started the case on Saturday morning.

Apart from the named eight arrestees, several unknown people were also accused in the case, DIG Habibur told media.
The arrestees will be taken into remand via court for questioning, he added.

SP Alam said they will bring to book the others responsible for the tragic incident and the subsequent deaths after interrogating the eight arrestees.

On Thursday evening, at least 49 workers — trapped on the third floor with its only exit locked — died when a massive fire engulfed the Hashem Foods factory building. Three others also died after jumping off the six-storey factory.
Most of the victims were women and children, who worked in the factory.

Meanwhile, only three of the deceased have been identified and their bodies were handed over to their families since Friday, police confirmed.

Two of the bodies — of Swapna Rani and Nina — were handed over to their families on Friday after they died at a local hospital in Rupganj.

The third deceased — 22-year-old Morsalin Haque — died at Dhaka Medical College Hospital (DMCH) on Friday night. His body was handed over after an autopsy on Saturday afternoon.

The other dead bodies are yet to be identified as they had completely burnt to an unidentifiable state.

The fire was finally brought under control fully on Friday night after 29 hours of frantic efforts.
The injured are undergoing treatment at DMCH and US-Bangla Medical College and Hospital at Rupganj.

Apart from the Home Ministry probe team, several other agencies and the local administration have also started investigations into the incident.

According to the Fire Service, a huge amount of plastic and packaging materials in the building had fueled the fire in just a few minutes after it broke out.

They said the blocked door at the factory’s staircase has caused so many deaths that could have been avoided.