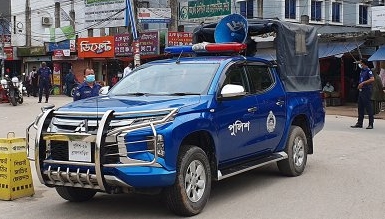 All in all, about a thousand members of the police will be deployed on Sunday

Hundreds of police personnel are preparing to be deployed across the district from Sunday morning amid fears of possible violence between supporters of Brazil and Argentina.

Meanwhile, public announcements on loudspeakers in the district town were being made since Saturday morning advising all to refrain from engaging in conflicts over the game.

“Riots over on trivial issues are typical in Brahmanbaria, so we are not ruling out the possibility of any violence,” Mollah Md Shaheen, additional superintendent of police (crime and administration) told media.

Duty police from existing check-posts and patrol parties along with personnel from 116 additional beats will remain on the ground from 5am to 5pm on Sunday to prevent any incidents of violence across the district, he added.

“All in all, about a thousand members of the police will be deployed on Sunday,” he also added.

Longstanding rivalry between followers of the South American giants boiled over after Brazil’s semi-final win over Peru to set up the final against Lionel Messi’s Argentina, police said Thursday.

A dispute between two boys over which country played better football turned into a street battle with fans beating each other with sticks and throwing punches in Brahmanbaria, 120 kilometres (75 miles) east of Dhaka, local police chief Mohammad Amranul Islam told AFP.

“We have told villagers they can’t watch the matches on big screens. We have gone to villages and told them they can’t hold any gathering during the final,” Islam said.

Cricket is Bangladesh’s main sport but the country of 168 million people becomes a hotbed of football fanaticism for the World Cup and Copa America.