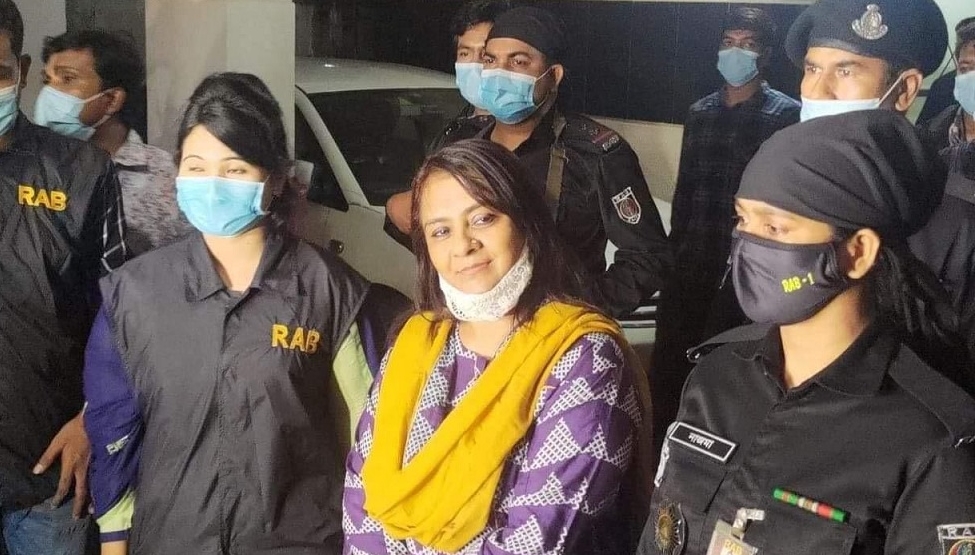 Five separate cases have been filed against her

Helena Jahangir, a businessperson who recently lost her post from the ruling Awami League, has been placed on a three-day remand in a case filed under the Digital Security Act (DSA).

Dhaka Metropolitan Magistrate Rajesh Chowdhury passed the order after Inspector (Operation) Sheikh Shahanur Rahman of Gulshan police produced her before the court on Friday seeking a five-day remand for interrogation in the case.

During the hearing, Helena denied all the charges brought against her, and said: “I was a member of an Awami League committee. I will always be involved in politics with the Awami League.”

Apart from the DSA case, four more cases were filed against her.
Director of Legal and Media Wing Commander of RAB Khandaker Al Moin Said: “Helena, who came to politics from business, was extremely ambitious. She will be prosecuted under the drug law, Wildlife Act, the Special Powers Act, the Digital Security Act and the Telecommunications Act.”

Helena is a director of the Federation of Bangladesh Chambers of Commerce and Industries (FBCCI) and chairperson of Joyjatra TV.
On July 25, she lost membership of the Awami League subcommittee on women affairs for her involvement with Bangladesh Awami Chakrijibi League, an organization with no affiliation with the ruling party.

She was also removed from the advisor post of the Comilla district unit Awami League.

Her organization had started seeking presidents and general secretaries for its upazila and district units, and branches abroad.

Helena was the self-proclaimed central president of the organization and one Engineer Saiful Islam Emon is said to be the central publicity secretary.