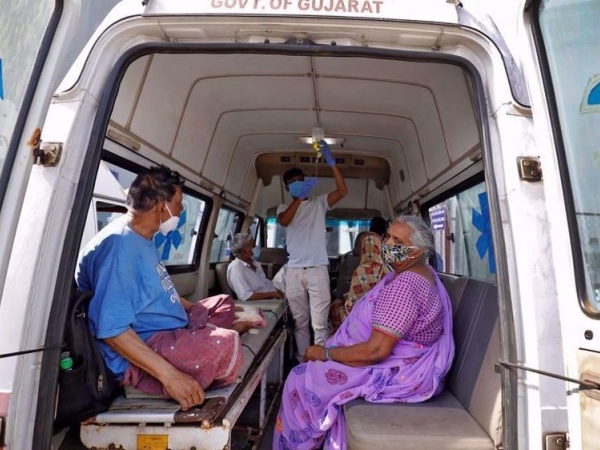 As Bangladesh languishes with the slowest COVID-19 vaccination drive among the South Asian nations, the government has drawn up a plan to inoculate nearly 10 million people in eight days.
Health Minister Zahid Maleque on Sunday said the mass vaccination drive will be held from Aug 7 to Aug 14 with the launch of the vaccination programme at unions.

Nearly 300,000 doses were administered across the country on Saturday, but it has to be cranked up to 1.2 million doses per day to vaccinate 10 million people in eight days.

The government plans to inoculate a total 140 million people, or 80 percent of the population, free of cost to stem the tide of infection and deaths due to the coronavirus disease.

Bangladesh’s average vaccination rate was among the lowest in South Asia behind India, Pakistan, Nepal and Sri Lanka, according to data from the Task Force on COVID-19 Vaccines, Therapeutics and Diagnostics for Developing Countries, a group formed by the International Monetary Fund, the World Bank Group, the World Health Organization and the World Trade Organization.

Data from a new website launched by the Task Force on Jul 30 showed that Bangladesh’s weekly average vaccination rate was 0.11 per 100 people.

In order to vaccinate 40 percent of the population by the end of the year, Bangladesh would need a daily vaccination rate of 0.49 per 100 people, according to the Task Force.

To achieve 60 percent vaccination by mid-2022, Bangladesh would need a daily vaccination rate of 0.35 per 100 people.

Bangladesh started its mass vaccination campaign in February, using the vaccine developed by the University of Oxford and Anglo-Swedish company AstraZeneca, bought under an agreement with the Serum Institute of India.
But the agreement for the doses fell through after the pandemic situation in India worsened dramatically and put a halt to vaccine exports.

The inoculation drive resumed after the government received consignments of Sinopharm vaccine from China, and Pfizer-BioNTech and Moderna vaccines under COVAX.

The latest programme drew the age limit for vaccination down to 18 years and above.

The programme, however, will prioritise the elderly ahead of the younger people, the health minister said.

Among the 20,916 COVID-induced fatalities in Bangladesh, 75 percent were aged above 60 years.

Md Shamsul Haque, member secretary of the vaccine deployment committee of the Directorate General of Health Services, confirmed on Sunday that campaigns from Aug 7 will be held at all unions, municipalities and city corporation areas.

Since the beginning of the mass inoculation in Bangladesh, people are required to register through government app “Surokkha” using their National ID cards.

Maleque said the registration process will be simplified.
We aim to] inoculate more people, who will be able to register using only their National ID cards or, in some cases, through a much simpler process,” he said.

According to the DGHS, as many as 8.8 million people received the first dose of the vaccine since the start of the mass vaccination while 4.3 million people completed the course with a second jab.

AstraZeneca, Moderna, Pfizer and Sinopharm all require two doses to complete the vaccination.

The government has an agreement with the Chinese company to buy 30 million doses of the vaccine, with seven million doses reaching the country in July.

It has also received 100,620 Pfizer and 5.5 million Moderna doses under the global COVID vaccine-sharing platform co-led by the World Health Organization.

A further 245,200 Oxford-AstraZeneca doses arrived from Japan on Jul 24, which will be administered to those who got the first dose of the Oxford vaccine but missed the second one due to a supply crunch.

Bangladesh is expecting big consignments totalling 12.9 million vaccine doses in August as well, including 1.29 million AstraZeneca shots, 4 million of Sinopharm and 6 million of Johnson & Johnson, according to Maleque.