Masterminds behind Bangabandhu’s killing will be exposed, says Hasina 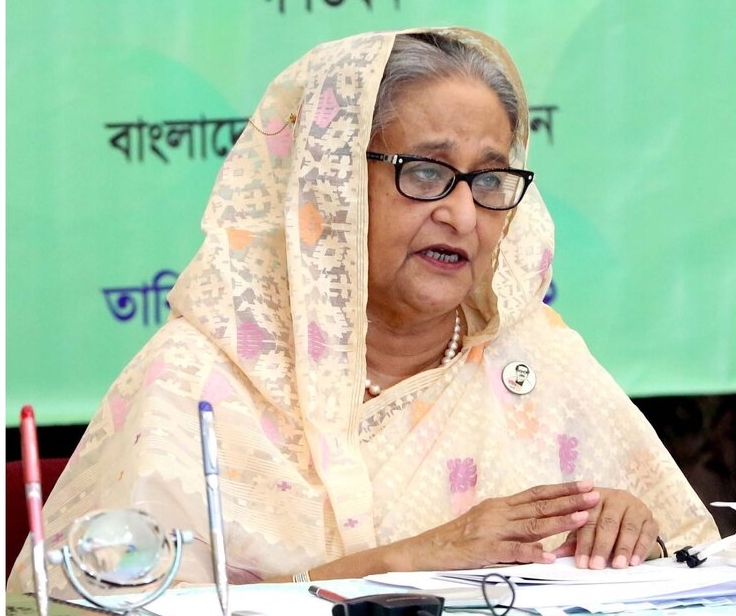 The masterminds behind the assassination of Bangabandhu Sheikh Mujibur Rahman will be exposed someday, Sheikh Hasina has said.
The killing of the Father of the Nation aimed to ensure Bangladesh can never rise to success, the prime minister said of her father’s Aug 15, 1975 assassination at an event which she addressed via videoconferencing from the Ganabhaban.

Bangladesh Krishak League organised the event for blood and plasma donation on Sunday to observe the Aug 15 National Mourning Day that marks the massacre of Bangabandhu and much of his family.

“What astonishes me is how some of us could get involved (in the conspiracy)? We have completed the trial for the killing, but the masterminds are yet to be found. One day they’ll be identified, that’s for sure,” Hasina said.

Hasina and her sister Sheikh Rehana escaped the carnage as they were abroad. Hasina eventually took the helm of the Awami League and guided it back to power.
My biggest task is to ensure the improvement of the lives of the people in Bangladesh and to fulfil the dream of Bangabandhu,” the prime minister said.

“So I focused on changing the lives of the poor and hungry for the better rather than running after the conspirators.”

Hasina recalled how Bangabandhu inspired the people of Bangladesh and gradually led the nation towards independence. The Pakistani rulers and a group of their “bootlickers” and collaborators, however, could not accept the emergence of Bangladesh, she said.

“Unfortunately, as Khandakar Mushtaque, a member of his (Bangabandhu) own party was one of the conspirators, there were others involved in the killing. Some of the army personnel were used to implement the plan, but it could never be done without the support of a high-up.”

Col Syed Faruque Rahman and Col Sultan Shahriar Rashid Khan, two of the self-proclaimed assassins of Bangabandhu, had said in an interview with BBC that Ziaur Rahman, the then deputy chief of the army, had contact with them and promised to be with them if they were successful in killing Bangabandhu, she recalled.
“Zia cooperated with them in every possible way. So, the relation between Mushtaque and Zia and their involvement in Bangabandhu’s killing is crystal clear.”

The prime minister highlighted her government’s initiatives to change the lives of the people when the Awami League came into power 21 years after Bangabandhu’s killing.

“When Bangladesh emerged as a sovereign country, many think tanks, economists and politicians in Pakistan said that Bangladesh had been a burden to them with its heavy poverty and lack of development. What they missed was that Bangladesh (then East Pakistan) had supplied the money for all of Pakistan’s development. It was Bangladesh that earned the foreign currencies and Pakistan used it for their benefit and development depriving Bangladesh.”

“When Bangladesh gained independence, some Pakistanis said that it could never become successful. If you analyse, you’ll see the similar thought reflected in the actions and attitude of those who usurped power after Aug 15, 1975. They, too, thought that Bangladesh could never succeed,” she said.