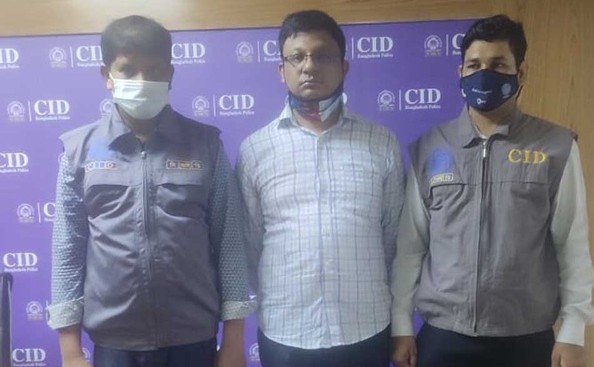 The Criminal Investigation Department has arrested a man accused of using the inspector general of police’s name and title to commit fraud on online platforms such as Gmail, Truecaller, Icon and WhatsApp.
The detainee has been identified as 43-year-old Md Arif Mainuddin, who was arrested in Dhaka’s Hazaribagh on Monday.

Arif used “particular tools” under the guise of a marriage social media site named Marriage.com to get Inspector General of Police Benazir Ahmed’s name, photo and title. He then used them to open Gmail, Truecaller, Icon and WhatsApp accounts. “He then contacted officials from various agencies and commercial banks, identifying himself as the IGP, in an effort to get certain benefits illegally,” Imam Hossain said.
One of the mobiles seized had a Gmail account with the ID [email protected] and the profile name Benazir Ahmed. Using this account, he accessed the phone’s Android system to open profiles on different apps using the IGP’s name. Whenever he called another phone, Truecaller would show the IGP’s name, title and photo to the receiver.”

Using a SIM and the IGP’s identity, Arif called private banks, including EXIM Bank and Mercantile Bank. The caller approached Mercantile Bank official Kamrul Islam on WhatsApp on Aug 29 for “unethical financial benefits through the use of threats”, Imam Hossain said.
Instead of using his own name to register the SIM, Arif used the national ID of another man for fraud. “He had many other SIMs like this. We believe that his efforts weren’t limited to the IGP, but also extended to other important government officials, including officials from the Prime Minister’s Office. However, more details will be available once our investigation concludes,” Imam Hossain said.

Arif confessed to his crime during an initial investigation, he said.

Arif completed a master’s in computer science from a private university in Dhaka before working for some time at a private bank. Once he lost his job, he turned to fraud in order to support himself.

The CID did not say whether the man had succeeded in defrauding people of money.
Imam Hossain urged the people contacted by someone using the identity of the police IGP or any other senior government official and using threats to inform the police of the situation directly or through the 999 hotline.

A case over the incident has been filed under the Digital Security Act with the Hazaribagh Police Station.