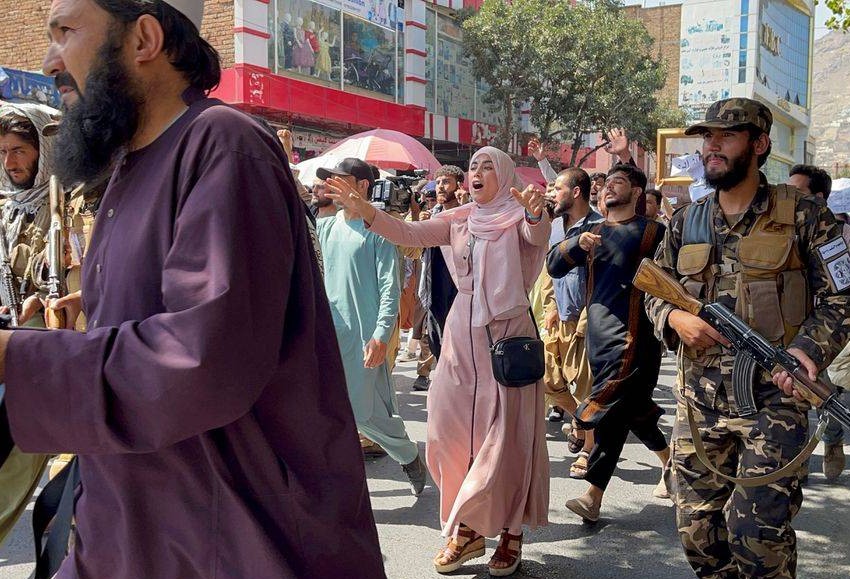 The hardline Islamist group has urged Afghans to be patient, allowing it time to form a government before it addresses people’s demands

A new Taliban interim government drawn exclusively from loyalist ranks formally began work on Wednesday, with established hardliners in all key posts and no women -– despite previous promises to form an inclusive administration for all Afghans.

As they transition from militant force to governing power, the Taliban are already facing opposition to their rule, with scattered protests — many with women at the forefront — breaking out in cities across the country.
A small rally in the capital on Wednesday was quickly dispersed by armed Taliban security, while Afghan media reported a protest in the north-eastern city of Faizabad was also broken up.

Hundreds protested on Tuesday, both in the capital and in the city of Herat, where two people at the demonstration site were shot dead.
The announcement of a government Tuesday night was a key step in the Taliban’s consolidation of power over Afghanistan, following a stunning military victory that saw them oust the US-backed administration on August 15.

Notorious for their brutal and oppressive rule from 1996 to 2001, the Taliban had promised a more inclusive government this time.

However, all the top positions were handed to key leaders from the movement and the Haqqani network — the most violent faction of the Taliban known for devastating attacks.
Same as old Taliban’

Mullah Mohammad Hassan Akhund — a senior minister during the Taliban’s reign in the 1990s — was appointed interim prime minister, the group’s chief spokesman said at a press conference in Kabul.

Mullah Yaqoob, the son of the Taliban founder and late supreme leader Mullah Omar, was named defence minister, while the position of interior minister was given to Sirajuddin Haqqani, the leader of the feared Haqqani network.

Co-founder Abdul Ghani Baradar, who oversaw the signing of the US withdrawal agreement in 2020, was appointed deputy prime minister.

None of the government appointees were women.

“We will try to take people from other parts of the country,” spokesman Zabihullah Mujahid said, adding that it was an interim government.
Hibatullah Akhundzada, the secretive supreme leader of the Taliban, released a statement saying that the new government would “work hard towards upholding Islamic rules and sharia law.”

The Taliban had made repeated pledges in recent days to rule with greater moderation than they had in their last stint in power.
The new Taliban, same as the old Taliban,” tweeted Bill Roggio, managing editor of the US-based Long War Journal.

“It’s not at all inclusive, and that’s no surprise whatsoever,” said Michael Kugelman, a South Asia expert at the Woodrow Wilson International Centre for Scholars.

As Afghans anxiously wait to see what kind of Taliban rule awaits the country, Zabihullah also announced the reinstatement of the feared Ministry for the Promotion of Virtue and Prevention of Vice.

The ministry had, under the Taliban’s former rule, been responsible for arresting and punishing people for failing to implement the movement’s restrictive interpretation of sharia law.
Actions, not words’

Even as the Taliban consolidate power, they face the monumental task of ruling Afghanistan, which is wracked with economic woes and security challenges — including from the Islamic State group’s local chapter.

A growing number of protests have emerged across the country over the past week, with many Afghans fearful of a repeat of the Taliban’s previous reign.

Later, two bodies were brought to the city’s central hospital from the site of the protest, a doctor in Herat told AFP on condition of anonymity for fear of reprisals.

“They all have bullet wounds,” he said.

The Taliban spokesman on Tuesday warned the public against taking to the streets, adding that journalists should not cover any demonstrations.

The group — which executed people in stadiums and chopped the hands of thieves in the 1990s — has said it would not stand for any resistance against its rule.

Washington, which has said it is in “no rush” to recognise the new government, expressed concern Tuesday about its members but said it would judge it by its actions.
We note the announced list of names consists exclusively of individuals who are members of the Taliban or their close associates and no women. We also are concerned by the affiliations and track records of some of the individuals,” a State Department spokesperson said.

Qatar, the central intermediary between the Taliban and the international community in recent years, also said the Taliban should be judged on their actions and said they had demonstrated “pragmatism” of late.