PM Hasina leaves for US on first foreign trip since Covid 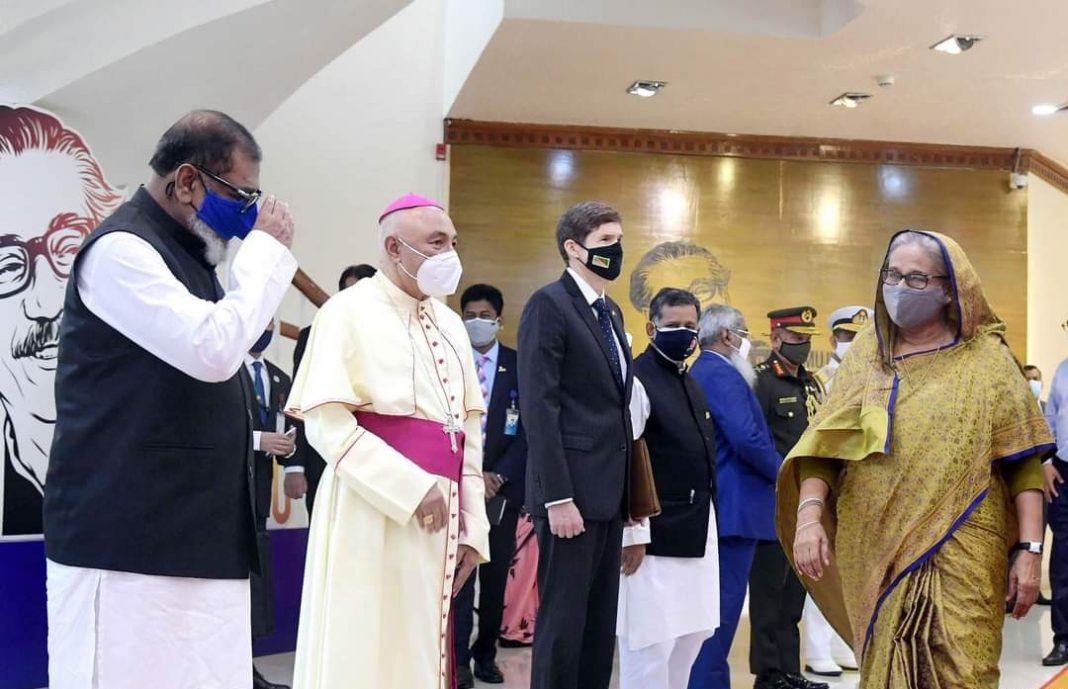 Prime Minister Sheikh Hasina left Dhaka for the US Friday morning to attend the 76th session of the United Nations General Assembly in New York, with a scheduled stopover in Finland.

This is Hasina’s first foreign trip since the outbreak of the Covid-19 pandemic in March 2020. She will attend the UNGA for the 18th time as the head of the government of Bangladesh and will address the general debate on September 24.

On Sunday, Hasina will leave Helsinki for New York by a VVIP flight of Biman Bangladesh Airlines (BG-1902) at 3pm (local time). The flight is scheduled to land at John F Kennedy International Airport, New York, at 6pm (local time).
She will stay at Hotel Lotte Palace during her stay in New York from September 19 to 25 as part of her official visit to attend the UNGA and a number of high-level events there. She will also hold talks with a number of leaders during her stay in New York. The prime minister is likely to return home on October 1.

In fact, on Monday, the prime minister will attend a closed-door meeting for a small group of HOSs/HOGs on climate change at the UNHQ at 9am, plant a tree and dedicate a bench at the UN Gardens at 11:30am in honour of the Father of the Nation Bangabandhu Sheikh Mujibur Rahman on the occasion of his birth centenary, and lay a floral wreath at the Peace Memorial on the North Lawn of UNHQ at 11:50am.
On the same day, Sheikh Hasina will sit in two separate bilateral meetings with EU Council President Charles Michel at 12:30pm (local time) and with Barbados Prime Minister Mia Amor Mottley at 2:45pm. Besides, she will join a virtual event of Sustainable Development Solution Network at 4pm.

On Tuesday, the prime minister will attend the opening session of the UNGA general debate at 9pm, sit in a bilateral meeting with Denmark Prime Minister Mette Frederiksen in the afternoon and join Business Roundtable on US-Bangladesh Business Council at 4pm.

On Wednesday, Hasina will virtually attend three events. The events are the high-level meeting of the UNGA to commemorate the 20th anniversary of the adoption of the Durban Declaration and Program of Action at 9am, White House Global Covid-19 Summit and a high-level event on Rohingya crisis at 3pm.On Thursday, the Bangladesh prime minister will send her prerecorded statements at two events. These are the Leaders’ Network on ‘Delivering on the UN Common Agenda: Action to Achieve Equality and Inclusion’ to be organized by Swedish Mission to the UN at 8am, and the Food Systems Summit, as part of the decade of action to achieve the sustainable development goals (SDGs) by 2030, convened by the UNSG at 1pm.

On the same day, Sheikh Hasina will sit in four separate bilateral meetings with Queen Máxima of the Netherlands at the place of residence, UN Secretary-General António Guterres at 1:30pm, Maldives President Ibrahim Mohamed Solih at 2pm and Vietnam President Nguyễn Xuân Phúc at 2:40pm at the UNHQ.

On Friday, the Bangladesh prime minister will address the UNGA 76 general debate in the morning, sit in a bilateral meeting with Netherlands Prime Minister Mark Rutte at UNHQ, and will virtually join a communityprogram.

Hasina is scheduled to leave Washington for Dhaka on September 30 and will return home on October 1 after a short stopover in Finland.