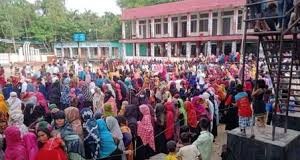 Voting to 160 union parishads (UP) in Khulna, Bagerhat, Satkhira, Noakhali, Chittagong and Cox’s Bazar and nine municipalities in the country, which were postponed due to the Covid-19 pandemic, began Monday morning.

The nine municipalities are Bhanga in Faridpur, Nangalkot in Comilla, Chakaria and Maheshkhali in Cox’s Bazar, Sonagazi in Feni, Kabirhat in Noakhali, Nawapara in Jessore, Debiganj in Panchagarh and Boalkhali in Chittagong.

The voting began at 8am and it will continue till 4pm without any break.

Election campaigning came to an end midnight on Saturday.
Candidates of other parties including Awami League and Jatiya Party (JaPa) are contesting in this year’s UP polls.

According to the Election Commission (EC), the polls will be held in compliance with the Covid-19 health safety rules.

Earlier, the commission was forced to postpone the elections due to a surge in coronavirus cases and deaths.

Election Commission Joint Secretary (public relations) SM Asaduzzaman had told the press that there will be four-tier security in the concerned constituencies to ensure a fair and peaceful election.

Strict measures have been taken to prevent all kinds of irregularities ahead of the polls, he said, adding that the concerned deputy commissioner (DC), superintendent of police (SP) and returning officers have been directed to keep the overall situation normal by executing proper law and order
Members of different law enforcement agencies including Rapid Action Battalion (RAB), police, and Ansar started patrolling the constituency from Saturday night to maintain law and order.

They continue with their efforts until the day after the voting.

There are also executive and judicial magistrates alongside the law enforcers to ensure a free and fair environment for the voters as well as the candidates.

Ballot boxes, ballot papers, and other election materials were sent to each of the concerned polling stations under special security on Monday morning.

According to the commission, total 44 candidates have been elected unopposed for the post of chairman in 160 UPs.