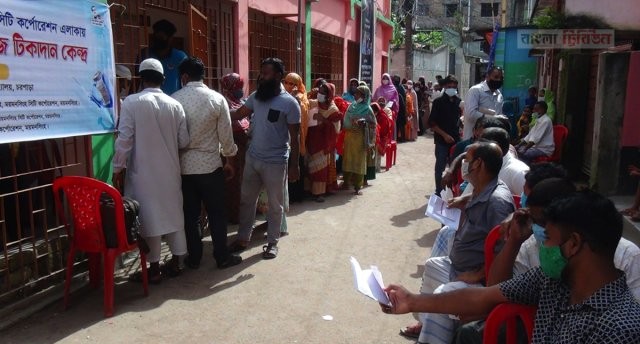 Less than 10% of the country’s population has been fully vaccinated despite the frantic efforts of the government.

Bangladesh launched its nationwide vaccination campaign on February 7 this year and the government had managed to fully vaccinate 14,820,442 people as of Sunday evening, against a population of 168.22 million.

According to data from the Directorate General of Health Services (DGHS), a total 22,494,565 people had received their first dose of a vaccine as of Sunday, while 7,674,123 were waiting for their second dose.
The number of people who have received first doses amounts to 13% of the country’s population and 19% of the government’s vaccination target of 130 million people (80% of the population). The number of people fully vaccinated amounts to just under 9% of the population and 12% of the vaccination target.

DGHS Director General Dr Khurshid Alam on Sunday announced on Facebook Live that the government would adopt a new policy with the aim of inoculating a greater number of people at the union level.

Under the new policy, people will be able to register at upazila health complexes to receive the vaccine at union-level centres. The vaccine seekers will receive a message when it is their turn to go to the centre, and the Expanded Program on Immunization (EPI) unit of DGHS will administer the vaccine.
The DGHS DG added that the vaccines would be administered on the two days when the EPI unit did not have its regular schedule.

He further said the government was planning to reopen walk-in vaccination one day each week for people aged over 60.

In addition, Dr Khurshid Alam said the health authorities were searching for a way to vaccinate students aged 12-17.

Meanwhile, Dr Mizanur Rahman, director (MIS) of DGHS, said the number of people registering for vaccination each day was much higher than the country’s vaccination capacity, so demand for vaccines was piling up.

He said the plan to open vaccination at the union level might help reduce the pressure at centres.

Till Sunday, a total 42,595,150 people had registered for the vaccine.
The eminent virologist and member of the National Technical Advisory Committee on Covid-19 Dr Nazrul Islam said there was no alternative to vaccination, maintaining social distancing and health rules to combat the deadly disease.

“The government must try to speed up the vaccination program. They are frequently changing their plans, and time will tell if their planning is realistic or not,” he added.

According to statistics from the website of Our World in Data, 43.3% of the world population had received at least one dose of a Covid-19 vaccine till 7pm on Monday. At least 5.95 billion doses have been administered globally, and 28.87 million doses are being administered each day.

Only 1.9% of people in low-income countries have received at least one dose
Bangladesh was among the first countries in the sub-continent to start vaccination, but repeated interruptions to the vaccination program due to inconsistent supply of vaccines has left the country second last in vaccination among SAARC member countries. Only Afghanistan trails Bangladesh, having fully vaccinated just 1.08% of its population.

Bhutan fully inoculated 90% of its adult people by late July, and is planning to vaccinate children aged 12-17 later this month. Overall, it has managed to fully vaccinate 61.40% of its population

The Maldives has fully vaccinated 60.71% of its population, while 51.41% of the total population of Sri Lanka has been vaccinated.