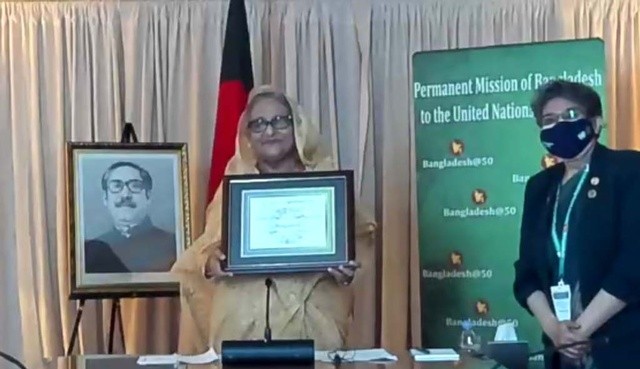 Prime Minister Sheikh Hasina has received the ‘SDG Progress Award’ in recognition of Bangladesh’s achievements in sustainable development from 2015 to 2020.
The award was given to the prime minister as part of the 9th Annual International Conference on Sustainable Development in New York on Monday.

The virtual event was jointly organised by the UN Sustainable Development Solutions Network (SDSN) and other organisations including the Master of Development Practice (MDP) and the Earth Institute of Columbia University.

“SDSN and several other organisations have presented Prime Minister Sheikh Hasina with the award in recognition of Bangladesh’s surprising achievements from 2015 to 2020. She dedicated the award to the people of Bangladesh,” Foreign Minister AK Abdul Momen said in a media briefing in New York afterwards.
Bangladesh features among the top three countries that have progressed most on the SDG Index score since 2015, when the UN member states agreed the 17 Sustainable Development Goals.

“The award is a recognition of our endeavours engaged in achieving SDGs. ‘Leaving no one behind’ is the key part of the SDGs. We will continue our efforts to march towards progress and prosperity so that no one is left behind,” Momen said.

The prime minister was introduced as the ‘jewel in the crown of the day’ at the event.