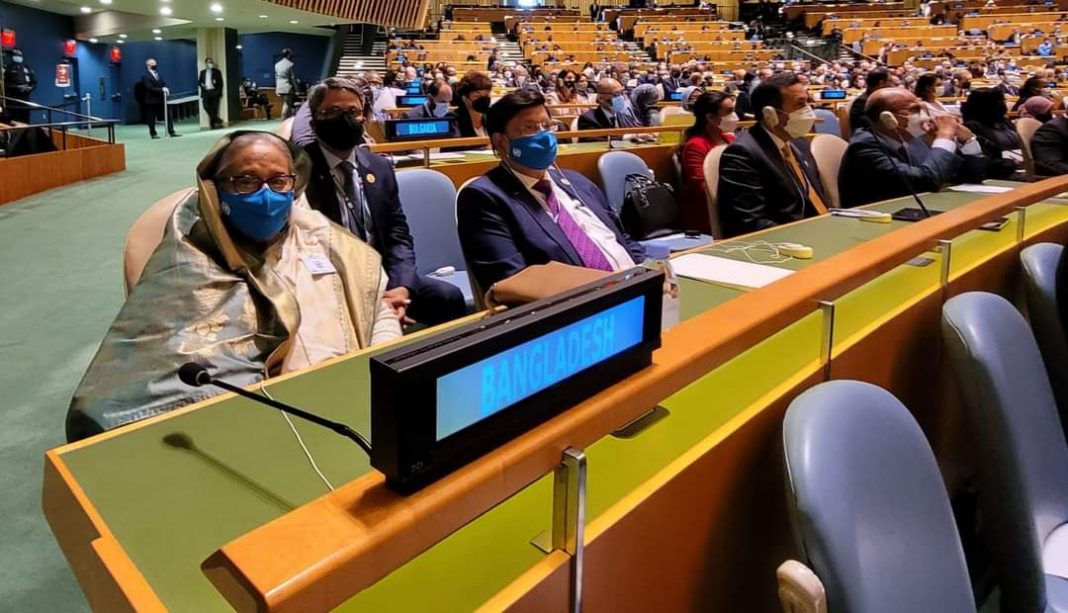 She highlighted three points — localizing the Advisory Board on Gender Equality, nurturing women-led organizations and convening a leaders’ summit to reinforce a common agenda for gender equality

Prime Minister Sheikh Hasina has said the world needs to act urgently to stop the rollback of hard-earned women empowerment due to the Covid-19 pandemic.

“Our hard-earned progress is at risk of rollback. We need to act urgently to stop this. For that, we must place women at the front and centre of Covid recovery,” she said.

The prime minister said this while addressing the High Level Meeting on Women Leaders conveyed by the President of the General Assembly Volkan Bozkır at
the Trusteeship Council of the United Nations Headquarters on Tuesday.

She highlighted three points — localizing the Advisory Board on Gender Equality, nurturing women-led organizations and convening a leaders’ summit to reinforce a common agenda for gender equality — to bring women’s progress back on track.

About the summit, Hasina said: “All leaders – not just us – should join and present concrete commitments for advancing gender equality.”
The prime minister said the Covid-19 impacts have been especially hard for women. “Unpaid care work has increased. Gender-based violence has risen. Unicef anticipates an additional 10 million child marriages before the end of this decade.”

In Bangladesh, she said, emphasis has been put on women empowerment. In their political empowerment, Bangladesh ranked 7th in the world. An increased number of women is joining the workforce.

“Women constitute the majority in the informal economy. Many of them lost their jobs and income. Two million migrant workers, including women have returned home,” the prime minister said.
In Bangladesh,” Hasina said: “To keep our economy moving in the pandemic, we announced 28 stimulus packages worth $14.6 billion. Our social safety net programs have been expanded to cover 11 million people, most of whom are women and children.”
She went on saying: “We made special allocation for women-led SME sector; introduced special skill projects in all districts, and announced interest-free mortgage and loan facilities for women entrepreneurs.”

Hasina also mentioned that 333 “helpline” is saving many women and girls from violence and child marriage.

At the commemoration of the 25th anniversary of the Beijing Conference, she pledged to raise women’s participation in the workforce to 50:50 by 2041. “Recently, at the Generation Equality Forum Paris, I committed to ensuring gender equality in ICT sector by 2041. I stand by those commitments.”
The prime minister said she strongly feels that women leaders of the world can establish a Women Leaders’ Network, which can bring them together, not just for one-off meetings, but to act as a force to ensure real actions to achieve gender equa.
UNB