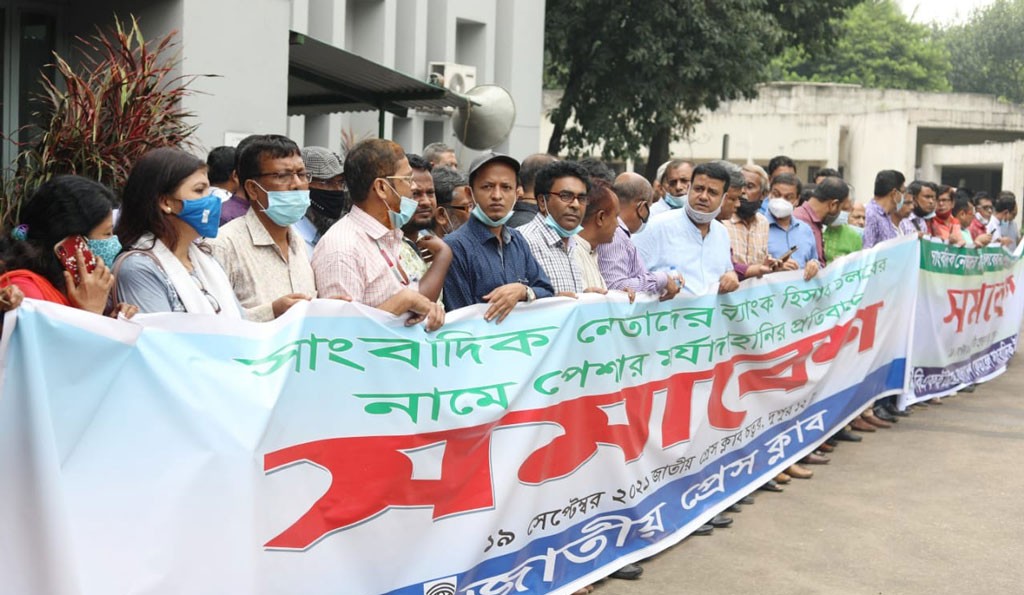 Journalist leaders have decided to postpone the pre-scheduled demonstrations across the country on Thursday, in continuation of their protest against summoning the bank account details of 11 senior journalists.

The decision came on Wednesday after holding a meeting between Dr Hasan Mahmud, minister for information and broadcasting and several journalist leaders.

The minister requested them not to hold the protest, added a press release issued on behalf of the 11 journalists, signed byMosiur Rahman Khan, general secretary of Dhaka Reporters Unity (DRU).

Road Transport and Bridges Minister Obaidul Quader, Home Minister Asaduzzaman Khan Kamal and Hasan Mahmud have spoken to the media in this regard. “In continuation of this, the minister of information and broadcasting sat with the journalist leaders at the Secretariat,” the press release added.
Hasan Mahmud said that he had already spoken at various levels about the importance of the issue. “The government is also trying to solve this problem quickly.”

He requested the leaders to suspend the protest for the sake of protecting the environment of cooperation in this regard, the handout added.
At the request of the minister, the journalist leaders postponed the protests until the return of Prime Minister Sheikh Hasina to the country, it the release read.

On September 12, Bangladesh Financial Intelligence Unit (BFIU), a wing of the central bank, issued letters to all banks seeking account details of 11 prominent journalists who head different forums of journalists.

The BFIU move was heavily criticized by the journalist leaders, groups and various human rights groups.