Trudeau will remain prime minister, but without a stronger mandate 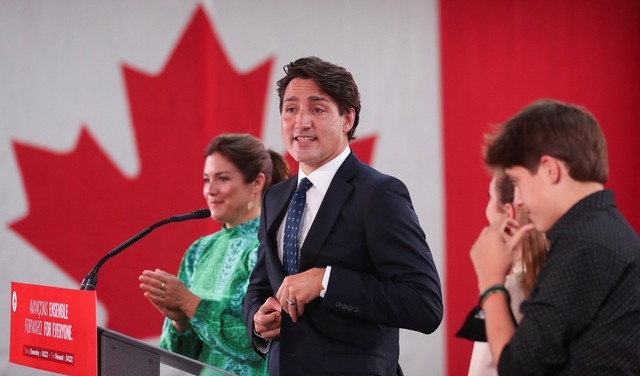 Prime Minister Justin Trudeau’s political gamble failed to pay off Monday when Canadian voters returned him to office but denied him the expanded bloc of power he had been seeking in Parliament.

Unofficial election results Monday indicated that while he would remain as prime minister, it would again be as the head of a minority government.

In August, with his approval ratings high, Trudeau called a “snap election,” summoning voters to the polls two years before he had to. The goal, he said, was to obtain a strong mandate for his Liberal Party to lead the nation out of the pandemic and into recovery.

But many Canadians suspected that his true ambitions were mere political opportunism, and that he was trying to regain the parliamentary majority the Liberals had until they lost seats in the 2019 election.

Whatever his motive, it did not work.

With some votes still being cast or uncounted, the preliminary results were a near repeat of the previous vote. The Liberal Party won 156 seats Monday — one fewer than it acquired in 2019 — while its main rival, the Conservative Party, won 121 seats, the same as before
If you missed the 2019 election, don’t worry, we just did a rerun for you,” said Duane Bratt, a political scientist at Mount Royal University in Calgary, Alberta.

The outcome left Trudeau in a familiar situation.

To pass any laws, he will again have to win members of the opposition over to his side. And, at least in theory, his party’ shaky grip on power leaves his government vulnerable to being overturned by Parliament.

In his victory speech early Tuesday, Trudeau acknowledged the unpopularity of his call for a snap election.

“You don’t want us talking about politics or elections anymore; you want us to focus on the work that we have to do for you,” he told a partisan crowd in a hotel in downtown Montreal. “You just want to get back to the things you love, not worry about this pandemic, or about an election.”