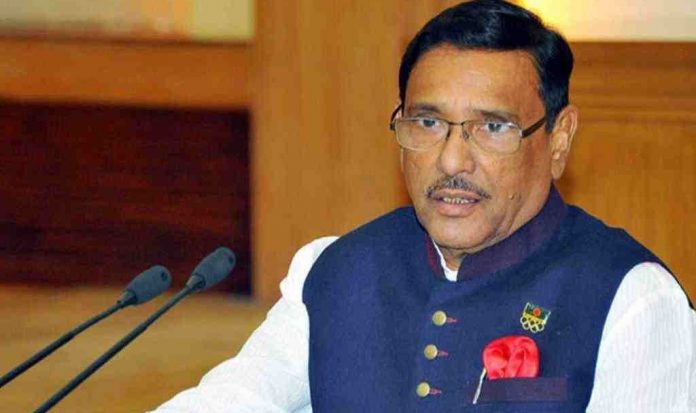 Awami League General Secretary Obaidul Quader on Sunday said his party is ready to give a fitting reply if BNP tries to resort to arson and violence again in the name of waging a movement.

Quader, also road transport and bridges minister, was speaking as the chief guest at a discussion on the occasion of Prime Minister Sheikh Hasina’s birthday.

The meeting was organized by the Awami League Relief and Social Welfare Sub-Committee at the party’s central office.
Referring to BNP’s series of meetings as part of an alleged conspiracy, Quader said: “It seems that there is a conspiracy to indulge in arson and violence again in the name of a movement.”

He warned that if BNP resorts to violence and disrupt the development work of Sheikh Hasina then Awami League, together with the people, would give a fitting reply.
Quader blasted BNP Secretary General Mirza Fakhrul Islam Alamgir for saying that the prime minister’s visit to the US has not been successful.

“You have no information. You haven’t read the New York Times. Every statement of the prime minister, including the speech at the UN General Assembly, has been praised by world leaders,” Quader said in response to Fakhrul.

Quader also said Prime Minister Sheikh Hasina had called for the eradication of Covid-19 vaccine inequality and to ensure vaccines for everyone.
Fakhrul, haven’t you heard the news? Didn’t you read the New York Times?” he added.

Reports suggested that if a nation wants to eliminate poverty, it should follow Bangladesh and witness the development carried out by Sheikh Hasina’s government, the minister further said.

He said developed countries have not done anything for Bangladesh to accelerate the repatriation of the Rohingyas, but PM Sheikh Hasina had spoken out on this issue with courage.